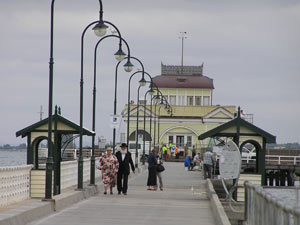 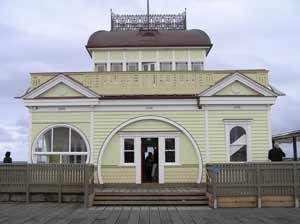 Just a quick heads up for the Melbourne locals. The St Kilda Pier Cafe is up and running again. It looks remarkably like the old version that was sadly barbecued. If you want to have a quick tour, try here.

For those of you who don't know of it, the cafe has long considered a landmark of St Kilda. Originally built in 1904, it was destroyed by fire in September 2003. There was a bit of controversy over the rebuilding as some wanted a change in style but Parks Victoria after a bit of "community consultation" decided rebuilding an almost exact replica was the best option.

A Sunday stroll after the market on the Upper Esplanade to the cafe for a cup of coffee is a quintessential St Kilda experience. The views from here are superb, looking as it does across Port Phillip Bay to Williamstown and the skyline of the city of Melbourne.

Hooray for tradition! I used to love going out to that cafe and was really sad to see its pitiful shell when I went there in 2004 (when I nearly got blown to Antarctica with the winter wind). Almost worth a trip back down to see it. Can you blog about trying the menu so we can all know?

What a lovely pier!