Recent Posts
A Vegetable Meme
Time Is Money
The Dark Side
Value Or Villany?
A Morel Dilemma
First, Make Your Beer...
Where's The Beef?
Parent Program
Learning To Fly
A View From The Hill 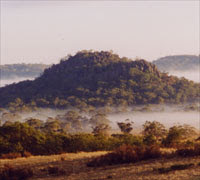 Photo courtesy of Hanging Rock Recreation Reserve - does it look like a nipple to you? Look closely now.

It's funny isn't it?

You can live your whole life near a major attraction and yet somehow, you never bother to go. Well this state of affairs is now rectified and I have finally been to Hanging Rock. There was a near miss a couple of months ago when we toured Mt Macedon and we found our way to the gate of Hanging Rock Reserve, but with an $8 entrance fee and being late in the afternoon, we decided to come another day and explore the reserve properly.

So with two other families, we packed up the cars and off to the rock we went for a barbeque. It's an easy drive up the Calder Freeway, about one hour out of Melbourne and is well sign posted. Not that you would easily miss it, for as you round Mt Macedon, Hanging Rock rises steeply from the surrounding plain. The rock itself was formed about six million years ago when lava was forced up through a narrow vent and formed a mamelon, a French word for nipple, which is a quite apt description of it.

The park itself is completely fenced as far as we could see and contains a horse racetrack, tennis courts, a cricket pitch, children's playground and plenty of covered barbeques and picnic tables. There is also a cafe and gift shop. We easily found a vacant barbeque under shade, the barbeques are coin operated with dollar coins only, but at least they work well, unlike council run free barbeques that never seem to work properly. Because it was a last minute decision to go we had only supermarket meat, but we made up for that with our salads.

After the food we went on the walk to the top of the rock. At the start there is an interpretive centre that gives plenty of info into Hanging Rock and of some interest is the part about Picnic At Hanging Rock, the atmospheric movie that was shot here. Where's Miranda? You can find out for yourself.

There is an asphalt path that climbs the one hundred and five metres to the top and parts of it are quite steep, there are also some stairs that I meant to come down on the way back. The walk to the top is amply rewarded with the superb views across the countryside all around. A second mamelon is clearly visible on nearby Mt Macedon and are apparently the best examples of this geological structure in the world.

At the top is a bit of scrambling around the rocks to gain access to the views so carry as little as possible to make it easier. Also sturdy footwear with a good grip would be great, for weathering has made some of the rocks smooth and slippery. We moved around the top for about half an hour and it is surprising how quickly you can lose track of others, a point the film makes well, you could be five metres from someone and be completely unable to see them.

After a look and a chat about whether the rocks were hanging or dangling, plus a photo session it was time to go back down and it was then that our party had a Bugs Bunny moment - we shoulda takin' that left turn at Albuquerque. We simply followed some others that were leaving the top and the track we took got progressively rockier and steeper culminating in a ten metre drop to the base. Truth be told it was a little scary but also exhilarating at the same time. At times I felt like a contortionist as I slid and scrambled down the steep rocks. I'm not recommending this route to anyone! A couple of our party did find the right way back and traversed the steps telling us the view was great from this direction too.

Back down the rock, we came across a female kangaroo with a joey in her pouch that entranced all the kids and provided more photo opportunities for us. All in all it was a great day that kept the kids as well as us busy, always a sign of success. Don't wait as long as I have to take a look, it's a great day out.

It was a long weekend here and I can tell you we will be going back for sure, it's a lovely spot.

Neil, wonderful day had by all. I hadn't noticed the 'mamalon' or the resemblence until you pointed it out. Hmmm, is it a coincidence that there is two, and that the local aborigines have dubbed the place 'unfinished business'? Hehe. I still say sometimes the rocks are not hanging but banging. Cheers

Hi greg, it was a great day out, especially at the top of the rock. I hope that's what the aborigines meant, cause the volcanic eruption was geologically not that long ago!