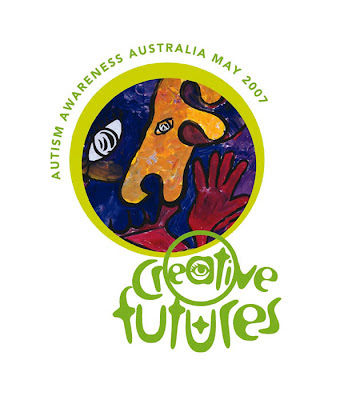 This week in Australia is autism awareness week and for those of you who are interested, I'm going to attempt the daunting task of explaining a bit about autism. It's daunting in the sense that I am in fact not autistic and can never fully understand or comprehend what it really is like to have this condition. What I'm going to write about are observations and whatever information I've been able to gather.

First of all, what is autism?

Well, to give it its full title, it's autism spectrum disorder or ASD for short and it would be rather nice if someone were to get rid of the disorder part, for reasons that should become clear. What Autism Victoria has to say about it is this...

The way people think about autism has changed in recent years. It is best described as a group of disorders with a similar pattern of behaviour in three key areas - communication, social interaction and imaginative thought.
The currently favoured term is Autism Spectrum Disorder, with the word 'spectrum' used because no two people with an Autism Spectrum Disorder are exactly alike.


What is an Autism Spectrum Disorder?


There is no specific diagnostic test for Autism Spectrum Disorder. The best way to get a diagnosis is via a multi disciplinary assessment. For children, this involves having your child tested by a number of professionals, who will provide you with the information you need to make decisions about program and treatment approaches. For adults, either a psychologist or psychiatrist experienced with Autism Spectrum Disorders can make a diagnosis.
The age of diagnosis these days ranges from approximately 18 months through to adulthood, depending on circumstances. A diagnosis of Autism Spectrum Disorder will only be made if the 'autistic like' pattern of behaviour is apparent before the age of three years. Sometimes a provisional diagnosis is made if the child is very young, and a reassessment at a later date is recommended.

Think you don't know someone with autism? Think again. According to the first Australian survey on autism prevalence, the study has concluded that one in 160 Australian children aged between 6 and 12 years have an autism spectrum disorder (ASD) - for a full report, go to the Australian Advisory Board on Autism Spectrum Disorders webpage.

My daughter is amongst the one in 160, so I have a pretty fair idea of what autism is and I also have a few ideas about what it's not. The thing is, when you are born with autism it is an integral part of you and helps define who you are as a person - autism is not a separate part of you that can be treated and got ridden of, it becomes who you are, for there is no cure for it, only treatments and strategies that help autistic people to become part of society, if that's what they want, and adapt to dealing with what are referred to as neurotypical people, that's you and me, because from an autistic point of view, we, the neurotypicals, can be as unfathomable as autistic people can sometimes seem to us.

To illustrate this last point, imagine you go to a country where they speak another language and you start trying to communicate with the locals. You try so hard to make yourself understood and the natives try just as hard to understand you, but without a common language, it all ends in frustration on both sides, that is something autistic people have to with live with every day. But what makes it difficult for neurotypicals is that even if you do know someone with autism and manage to hammer out a common language, when you bump into another autistic person, your new language, in all probability, won't be comprehensible to them. That is why it is referred to as an autistic spectrum, no two people with autism are exactly the same.

However, there are some things you can do to make it easier to talk to someone with autism. One common feature is that often processing verbal information takes an autistic person a bit longer. If you ask a question, you need to allow extra time for a reply and resist the urge to repeat or rephrase the question, as this can cause the whole process to start from the beginning again. Because you in all likelihood don't know where a person is on the spectrum, don't be surprised by an answer that is not what you expected, autistic people can be very literal and take you at your word, when you in fact meant to say or ask something else.

There is no question that it takes patience to be with someone who has autism. I always thought of myself as a patient person but didn't learn the real meaning of patience until my last daughter was born. It was after an incident when M was about two, when she did something that tipped me over an edge and I'm now ashamed to say that I raged at her. But I had a concurrent out-of-body experience where I could see what I was doing and at the same time could also see that M had absolutely no idea why her dad had turned into some kind of monster. It was this insight that led me to understand patience was just not the ability to stand in a line uncomplainingly, but to be able to see past behaviours that M has no control of, and learn how to teach her to deal with them.

Shopping is one area that can give parents of autistic children the heeby-jeebies. It can turn into a nightmare in seconds, with their children grabbing things off the shelves, running amok or even having a meltdown right in the store. M was no different, so what I did was to take her shopping in increments. When I didn't really need to shop, I would take her to buy just one thing and leave straight away. This went on for months, sometimes it was great, sometimes it wasn't, but gradually over time we built up the length of the shopping trip, until we could buy several items at a time, then when M wanted to buy something, I would let her and like all kids, one thing was never enough, then it was time to learn choice, that she could have one thing and one thing only, but she had to choose. At the moment we are up to waiting our turn to be served. Sound familiar? It should, it's what all kids have to learn regardless.

And that's the point, my daughter is the same as every other child and responds just like everyone else to parenting. We have certainly had to break things down, to make them manageable, but at the end of the day she is a human being, expressing herself in her own unique way and perhaps the key to it all is acceptance. I think if you spoke to any autistic person, all they would ask of you is to accept them just the way they are.

If you would like to get some idea from an autistic point of view about how they are viewed, look here.

You are an excellent father, friend and spoke's person for autism.
You draw out the specifics of a parenting act so clearly that it's possible to follow what's going on for parent and child!
Awareness, you have it and best you have a fantastic ability to communicate that awareness!

Heeby-jeebies (thanks for spelling it) ... I think it probably dates us! ;)

Neil, M is blessed with you as her father, she's a very lucky girl. :) I don't know what it's like to have someone who is autistic in the family, but thanks to you I have a better understanding and appreciation of what that is like. Thank you.