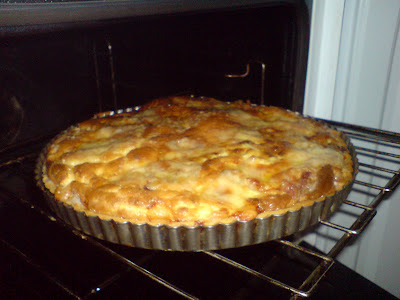 Photo by Nick Murray
Puffed and golden, straight from the oven.

No, I don't wanna fall in love with you
The world was on fire no-one could save me but you
Strange what desire will make foolish people do
I never dreamed that I'd love somebody like you


My eldest daughter P is always thinking up cooking projects, then asks me over to help. So long as it doesn't involve croissants and the middle of summer, I'm happy to go along and help create whatever is on her mind. Last week she called and suggested that a quiche Lorraine might be a nice idea and I pretty much never argue against a dish that contains bacon or gruyere cheese for that matter, two of my favourite things.

Having no kaiserfleisch or gruyere, meant a trip to the butcher. Of course one could use ordinary bacon sliced into strips, but kaiserfleisch, cured and smoked pork belly, gives just the right amount of bacony goodness, tender little nuggets that make you praise the heavens that pork and smoke were invented and put together in a miraculous covenant, bringing joy to mankind, or at least those with no porcine prohibition, even then there are some who surreptitiously indulge when their religious leaders are out of sight, say no more.

Now there are two types of kaiserfleisch, uncooked (green) and cooked. We pretty much always get the raw version for it retains more juiciness when cooked, which is pretty much true for all smoked pork products. Last weekend, we had a Christmas in July party and we roasted a joint of kassler (smoked pork loin) on the bone. It was uncooked to begin with, just cured and heavily smoked and everyone remarked how juicy it was. We have also done the same with shoulder hams to great effect and we usually never buy precooked bacon for the same reason. You just need to search out a butcher or smallgoods supplier who specializes in it.

Happily for me, my butcher also sells gruyere cheese, do you think he might be Swiss? Not the rectangular blocks of factory cheese that my wife D says smell like baby vomit, but from a wheel of farmhouse gruyere that was sweetly intense and nutty, which even gruyere disliking D pronounced as very tasty. The truth is, I had to put the piece away to ensure there was enough to make the quiche. 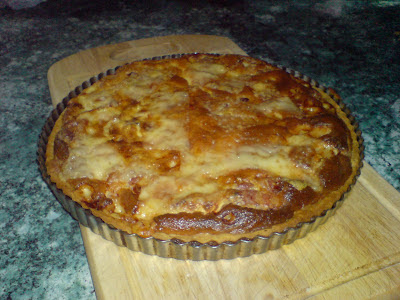 Mind you, despite having everything tasty and good under the sun in it, it's not the sort of thing you would want to have very often, containing not only the aforementioned bacon and cheese, but a fair lump of butter and a generous amount of double cream, besides the flour and eggs, making it a real cholesterol bomb. No heart tick of approval for this wicked thing! But what it also has is tons of real flavour, some quiches tend towards blandness, but not this little baby, no sir, this is gutsy food; if a real man wanted to make quiche, this is where he would start. 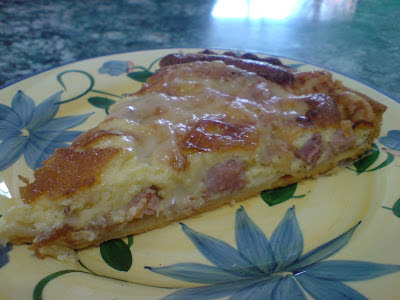 
You probably looked at the other photos and thought, oh yeah, nothing special, but when you see it cut ready for serving, with the warm, creamy, melted cheese and egg encasing those delicious bits of kaiserfleisch, you know you want a piece, don't you? It was all I could do to save a slice for D as a hungry swarm descended and demolished it.

Place the flour, sugar and salt on a work counter, make a well in the centre and put in the egg and butter. Gradually rub in the flour and when everything is almost mixed, add the milk and knead the dough two or three times to combine everything. Try not to work it too much or the dough will shrink back later. Leave to rest in the fridge for an hour. Roll out to fit a 25 cm (10") flan dish and prick the base with a fork all over. Line with foil, fill with pastry weights or beans and rest in the fridge for thirty minutes. Bake in a 200 c (400 f) preheated oven for ten minutes, remove the weights and foil and cook for another ten minutes.

Remove the rind from the kaiserfleisch, cut into strips, then lardons. Blanch in boiling water for one minute, drain, then fry quickly for one minute, do not let them dry out. Scatter the lardons and gruyere over the base of the pastry case.

In a bowl whisk together the whole eggs, egg yolks and cream until combined, don't whisk too much, season with salt and pepper and pour into the pastry case; it should come to four-fifths of the rim.

Bake in a 220c oven for 20 minutes, reduce the temperature to 200c and bake for another 20 minutes until well browned. It can be served straight from the oven or cooled slightly.

Note: The original recipe called for 600ml double cream, 3 whole eggs and 6 egg yolks, but in my shallow flan ring (1"/2.5cm), this was way too much. Two tablespoons kirsch was optional and they also said to shave some of the gruyere and place on top of the quiche five minutes before the end of cooking, but it looked better without this touch.

Amazing how all that good work can disappear in a flash.

We had the cross-channel equivalent for lunch the other day, an old-fashioned home-made egg and bacon pie. Delicious, but I think the French version takes the honours.

Oh yummy. I just love quiche lorraine. I used to work at a French restaurant in college, and it was one of the things we could eat for $.40. (This was a *long* time ago!) The other $.40 items were spagetti and French onion soup, so I had quite a lot!

Hey Neil the Quiche looks quite quintessential! :D I would say anything having to do with bacon the way you describe it must absoltively be "real man" food!! Bravo!!! And oh mah gawd do we love gruyere!!!

This really does look like one of the most amazing quiches ever. I guess real men do...

This is quite the good looking quiche! I must admit that I've not had quiche lorraine other than one horribly rubbery piece at a cafe a few years ago, and I haven't tried it since. Your creation looks and sounds like an entirely different creation to that, so perhaps it's time I got my brother to make me this quiche so I can give it another go :D

Hi kitchen hand, locusts have nothing on my lot. I recently had some egg and bacon pie made by someone with English parents and it was quite delicious, but it was also different to this; they're both good in their own way.

Hi kalyn, $.40 would buy you one of the eggs today! I reckon it cost about $12 to produce, with the cheese being the major cost at about $7.

Hi blue zebra, I'm so with you on the gruyere, from the first time tasted it went staight onto the must have list.

Hi lydia, we do too!

Hi ellie, sounds like too much egg and not enough cheese in the slice you tried. I hope your brother rises to the challenge.

Oh yum,
You've made me hungry! I have a post waiting to finish about quiche. Not as upmarket as yours, but made with farmer's market free-range eggs, it was the yellowest quiche I've ever seen!
thanks for the pics

It has been ages since I've had a true full-fat Quiche Lorraine... this sounds so decadent and delicious!

Geeze Neil what I've been missing! I used to make this way to often back in the 80's and have been thinking about it recently. Yes, it is there with the fat but wow I know yours was filled with flavor. Great photos!

Hi joe, maybe it should be ages before I have another one too! That's the sad thing, full fat always seems to taste so good.

Hi tanna, it's probably due for a revival soon, perhaps when French food becomes fashionable (again).