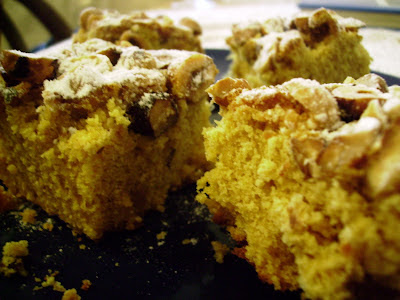 I watch all the Daring Bakers with a degree of admiration, for I know just how complex some of the recipes they attempt are. Perhaps this hazelnut cake doesn't have a great degree of difficulty, but it does have a ton of flavour and moistness. It's also evidence of why, probably, I shouldn't become one of their ranks. You see, this little cake has a tale to tell. 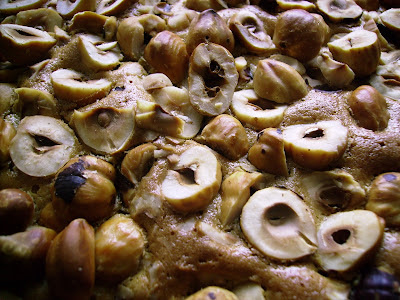 It's not being a bloke that stops me joining up, after all, baking is slowly becoming more fashionable amongst guys; a male friend of mine is in a baking club at work and all the men take it in turns to bring in baked goods. We have even discussed the merits of certain baking books. Rather, it's my sometimes less than disciplined approach to the necessity of following a recipe exactly, which as any baker will quickly tell you, is vital to the success of the enterprise.

I can see sager heads than mine, nodding in agreement here.

I first made this cake in the early nineties, after seeing the recipe for it in Pierre Koffmann's book, La Tante Claire. If you have any interest in French cooking at all, especially French country cooking, you ought to search out this book and its earlier companion, Memories of Gascony, they're not just great cookbooks, they're great reads as well.

After this cake first caught my eye, I made it a few times; it was the first cake that I ever baked for my wife, before we were married, at the dinner where we first met, so it has also led to a great deal of happiness. When I worked at the Melbourne Congress Centre, this cake came to work a couple of times, and the pastry chef that headed the section where I worked was so taken with it, he ordered a sack of hazelnut meal and told me that he was going to put it on the menu. His face dropped somewhat when he discovered that there was in fact, no hazelnut meal in it at all!

But this is now a cake with a serious split personality. The first time in making this, I followed the recipe exactly, which we all should do the first time around, after all, someone has gone to the trouble of writing it down just for us. But after that, well, it's kind of a free-for-all, recipes are adapted and made your own. Only thing is, when I made my adaption, it wasn't exactly intended. Because I had already made it a few times, I only needed the list of ingredients, or so I thought. What I forgot to do, was at a crucial point, when the dry ingredients are halved and one half is pressed into the cake tin to form the base, me, who thought he remembered the instructions, forgot all that and proceeded to mix ALL the dry and wet ingredients.

Pierre, I don't know how to say this, but everyone thought the cake was now better than before! 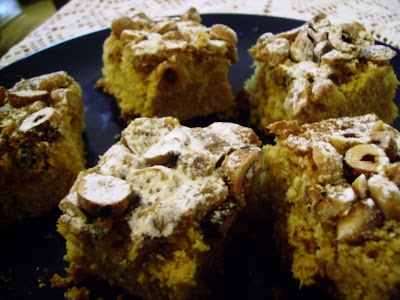 Of course that is not the only indignity the recipe has had to suffer. Sometimes the sour cream is just scooped out of the jar and straight in without measuring, the baking powder is very often near enough is good enough, what size is the egg? Who cares? The only thing I wouldn't do is substitute white sugar for the brown. Just to show I do care though, where the recipe advises to roughly chop the hazelnuts, because I like the way they look when chopped in neat halves, after roasting and skinning, each hazelnut is individually cut. The recipe can easily be multiplied too, the cake in the roasting tray is three times the quantity. 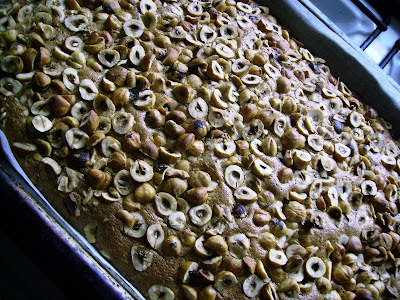 Roughly chop the hazelnuts into halves. Line with baking paper and generously butter a 19 X 19 X 3cm cake tin (can be round too). In a bowl, mix together the brown sugar and flour and rub in the butter until the mixture looks like coarse sand. Spread half the mixture in the cake tin if you want to follow the original recipe, or simply whisk the sour cream, baking powder and egg and add to the bowl containing the pastry mixture, mixing well. Pour this into the cake tin and spread evenly. Sprinkle over the chopped hazelnuts and bake in a 180c oven for about forty minutes.

Leave to cool in the tin, then invert to a plate, so that the hazelnut topping is on top, sprinkle with some icing sugar.

*Most people use a tea towel to rub off the skins, My friend Tanna advises that an onion bag with fine mesh does an even better job. Always roast more hazelnuts than you need, try one, you'll see why.

Ahh, it looks very good. I'm not a baker at all, and never will be. I have resigned myself to it!

I am not only not a Daring Baker, I am a true bake-o-phobe! And I am a terrible measurer. So it's fun to read about other people's baking exploits. I am, however, always available for tasting!

Neil, Neil I do love this cake and all it's iterations and each story around it!
Now let me get this straight: the original divided the brown sugar, flour & butter, half went in the pan and half got mixed with the sour cream, baking powder & egg and that then goes on top of the first. Then the hazelnuts are put on.
But it really works better to mix all with the sour cream. That is genius!
And the fine plastic mesh bag does do an incredible joy on the hazelnut skins.
Great cake.
The worst part about this post is that now I have two cook books to add to my wish list!

Neil, I actually enjoy simple but rich cake like this much more! I adore hazelnuts, and this seems like a fantastic way to enjoy them. And thanks for the recommendations of the 2 cookbooks. I am into reading about French country cooking lately. :)

Hi kalyn, despite being able to cook most things, I've never been able to bake a sponge cake like my mums.

Hi tanna, there was no genius involved, just a lazy baker! I'm waiting until we empty the onion bag to give it a go.

Hi anh, everyone who has tried it, loves it, and if you only roughly chop the hazelnuts, it takes no time to do and still tastes the same.

What a great story to go with the post. I'm no Daring Baker either and admire all those guys (or girls to be more accurate) bake those intricate things.

I hope baking is becoming more fashionable amongst guys because I started to bake about 4-5 months ago and I'm loving it. I like the structure of baking. I'm terrible with any other food, but I know if I follow the recipe precisely (well the first time round anyway) the result will turn out good. The second time round, I usually modify it to suit my own taste, like more Marsala in Tiramisu, more chocolate in everything, less sugar so it isn't so sweet etc.

This recipe looks very simple, my kind of baking. I'm going to give this a try soon.

Hi thanh_7580, I know what you mean about structure, baking has to be precise to work well, but as you get more experience, you know where to adapt. This is a nice easy cake to make and compliments will soon flow your way.

This is an excellent recipe, however has anyone ever tried making this cake with honey along with hazelnut. I tried it with my family as an experiment and they loved it.
The hazelnut I had actually came mixed with honey, I bought it from this company called Holy Food Imports (www.holyfoodimports.com) and it tastes great.