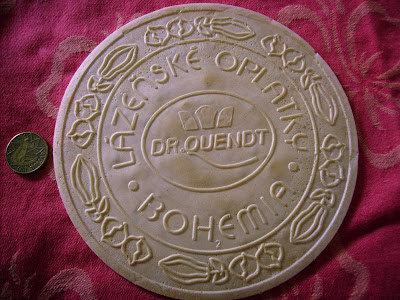 Nestled on the left hand side of this biscuit, is a dollar coin, about 1"(2.5cm) in diameter, some biscuit don't you think?

These paper thin, filled wafer biscuits were invented in the 19th century, to help patients that had submitted themselves for the "cure", at the Karlsbad spa (Karlovy Vary) in what is now the Czech Republic. There are spas all over Europe which have a long history of helping those who had problems with digestion, liver or kidneys, or who had simply taken life's pleasures a bit too seriously.

All sorts of weird and wonderful ideas were hatched in these spas to help their patients. In my last post, I mentioned Pierre Koffmann and he tells a humorous story of working in a health clinic in Switzerland that specialized in slimming, the proprietor of which was apparently in desperate need of the cure himself. This owners particular method of helping his clients consisted of asking them what their favourite food was, then allowing them to eat as much of that as they liked. The only proviso was that they could eat nothing else, breakfast, lunch and dinner until the patient was heartily sick of their favourite thing, then the cure could begin in earnest. Sometimes there could be a holdup at the start if the patient was unsure of what their favourite food was and then it was up to the chef to invent new combinations.

The Oblaten was born from this kind of thinking as well. The idea of it is, to trick the eyes and stomach with something that looks huge, though not substantial at all, but leaves you feeling full. Inside is a light filling, which can be chocolate, vanilla, almond or hazelnut. I'm not sure if these biscuits actually worked - the reason they're still around today is that they are extremely tasty and very moreish. In our household, if you don't get in early, don't expect anyone to save you a biscuit, all you will find are a few crumbs!

Not sure I've ever seen a biscuit quite like this! Would love to try one.

Interesting! I will be wake up early just for this!

Hi tanna, I know someone who will try to push past you!

Hi lydia, we only had our first ones a couple of years ago. There do seem to be some spots on the web where you can order them, we like the hazelnut best, good luck!

Hi anh, not earlier than M. I caught her the other morning eating a whole sealed packet of three for breakfast. You can try though.