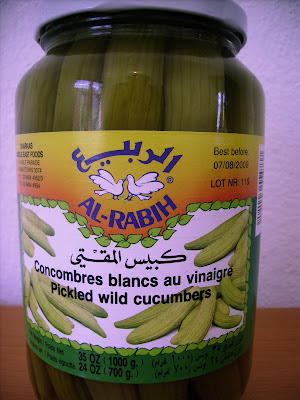 Here is something you don't see everyday, a jar of pickled WILD cucumbers! We first got on to these a few years ago and have them as a change from the fermented and pickled cucumbers that usually grace our pantry. Mind you, it is only an occasional change, as these beauties are as salty as all get out, which I'm theorising is because wild cucumbers might be a little bitter and are well salted to make them more palatable, in the way most older cookbooks tell you to salt eggplant (aubergine) slices to draw out the bitter juices. 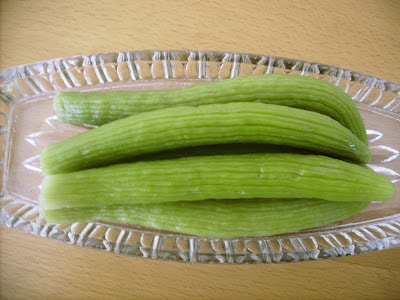 As you can see, they are long and very slender, but are distinctively cucumber shaped and seem to have more in common with Mediterranean cucumbers than other varieties. Cucumbers themselves are thought to have come from India and then embraced by the rest of the world. These wild cucumbers however have nothing to do with the wild cucumber of North America, known as manroot, which are shorter, rounder and spiky.

Because of the strong salty taste, which is accentuated by the pickling liquid, describing their flavour is a little difficult, but they are definitely slightly different to other pickled cucumbers, with a slight earthiness evident. They would most probably be served as part of a meze, no doubt with some fiery arak, or lion's milk as it's known in Lebanon, which could turn into a nasty little circle with all that salt leading to just one more drink...

This is my entry to Weekend Herb Blogging, this week hosted by The Expatriate's Kitchen.

I've never seen anything like this before. What's interesting is that I kind of recognize the logo on the jar; I think that brand of stuff is sold in middle eastern stores here.

I saw that bottle somewhere but never knew what to do with this. An informative post as always.

I've never heard of wild cucumbers. Years ago I made a batch of pickles that was very high in salt. They shriveled to half their size and you could bent them in half without snapping - but were incredible crunchy...
If I ever see these I have to try them.

Strange!! This cucumber also known as snake melon in hindi word it is called " kakdi".cucumber in India are kirby type.Very rarely we get chubby cucumber with seedsand sometimes couter skin is bitter. In india ,cucumber is very seasonal and was very costly as compared to other seasonal vegetables.Probably to meet demand with supply.In India,you will find roadside vendors ( poorest just cucumber stock s only) fresh cut cucumber toasted with black salt.Other than this,You find recipes only in" raita" of north India and" pachadi" of south India .
pickled cucumber is entirely new for Indian food environment.
Thanks for giving clues for " manroot".BTW, we hardly get this ype here in USA even in indian stores.

Ah, I think I'll be making the rounds of my special grocery stores today and tomorrow. Sounds like a fun thing to try.

Sometimes I think you must just climb around stores looking for the different.

On reading "man root" , I suddenly remembered yellow cucumber which is round in shape."Dosakai " Andhra's specialty which has pickling recipe.
This of course is lemon Cuke .Is it popular in other hemisphere? andhrites enjoy this type cucumber. pickle.Thanks again.

Hi kalyn, very dangerous indeed! Hope you can find some, they are kind of interesting.

Hi anh, don't we all have a bottle of some such thing that we've never tried before. Sometimes you just have to grab the nettle.

Hi katiez, when you think about it, there are, apart from fish, not a lot of wild foods available, so it's nice to try them. We do cucumbers every year, not pickled but fermented.

Hi ramya, isn't it funny that they originated in India, but are now wild in the Middle East? Very informative info re cucumbers, funny though, I would have thought they would be freely available there all the time. I don't know about yellow cucumbers but will look out for them.

Hi tanna, I really don't go looking as such, it's just when something catches my eye, promise!

I grew up in Lebanon and had these fresh and pickled. I usually rinse the pickled one to get rid of some of the salt before adding it to my sandwich. The fresh ones are not bitter at all, actually, they are kind of sweet and very tasty, I wish I can find them fresh in the US :(.

I ate at a place called Pita'z today at Lindale Mall in Cedar Rapids Iowa. They put wild pickles on the pitas. They were salty but it was a nice touch.

These are called Mikty in Lebanon ( Arabic) they are not bitter at all. My father used to grow them for market as a lot of lebaneses do. When my mom used to pickle them the rule of thumb for the salt ratio to water was to add salt until a raw egg floated on the water and also added vinegar so that they would last. My husband grows a patch of these here in Canada, they need hot dry weather and we only water them when the plants are small, then not at all after we cover half the plant with soil

continue- they are also called Fakous in Syria(Arabic) but I don't know what the name for these in English is other than wild cucumbers. I got here because I was searching for their name online. When these pickles are made at home they're not as salty. I think the store bought ones are salty to make them last longer on the store shelf, a good tip is to soak them a bit in water to reduce the salty taste. Another note, the fresh ones are great in salads or just to munch. Enjoy.

We bring to you the latest and top-quality firearms ant very affordable/considerate prices! All of our guns are fully assembled, including any modifications made upon request. please contact us directly with questions or concerns prior ordering depending on current weather conditions where applicable. All Federal Firearms Licensees must be contacted before purchase so that their name may not appear when placing orders since we do use names listed only as reference during production – no warranties expressed here unless stated otherwise.
Buy Mossberg 590M 12 Gauge Mag-Fed Pump-Action Shotgun online