Feast or Famine?
Ever get an uneasy feeling just before popping something in your mouth? Like, should I really be eating this?

It's a sensation that probably everyone experiences from time to time, that slight guiltiness when you spread full fat butter on a slice of bread, or use dripping to start a braise, eating chocolate saturated with palm oil, or worse, the product of child slavery, a vegetarian's sense of treachery in falling off the wagon.

I certainly do and in fact experienced it just the other day, but for none of the above reasons. It was a healthy meal of takeaway sushi that was unsettling me, the sort that comes in a little plastic box with a rubber band sealing in several different types of seafood astride mounds of wasabi smeared rice.

Glowing with ruby luminescence and cut with samurai precision were a couple of pieces of a fish that is considered the supreme embodiment of this dish by the Japanese.

The mighty bluefin tuna or maguro as it's known in Japan where they pay the utmost respect to it, right down to naming various parts of the flesh. Toro, or flesh from the belly, is the most highly prized due to its higher fat content. It's also not unheard of for a single super premium fish to fetch in excess of $100,000 or around $800 a kilo, though the more usual price is around $50 a kilo.

But even that lower price is leading to the downfall of bluefin tuna as worldwide, more and more boats chase less and less fish, forcing them onto the ever growing list of endangered marine species.

Given the huge size of the world's oceans and migratory nature of bluefin tuna, they might seem an inexhaustible resource. Past scenes of tuna boats pulling in fish as fast as they could until piled high upon their decks reinforced this image of unlimited bounty.

But it seems no one is looking to the example of the Newfoundland northern fishery, which teemed with cod and had been exploited for hundreds of years. But as fishermen got better at catching cod in the industrial age, unfortunately, the fish didn't get better at reproducing themselves and the cod population crashed in 1992, leading to the closure of the fishing ground and along the way, throwing 35,000 people out of work, the largest industrial closure in Canadian history.

The parallels in Australia are clear. It is reputed that there are more millionaires in Pt Lincoln, the tuna heart of Australia, than anywhere else in the country, made wealthy on the sleek backs of bluefin tuna.

It is here, after the catches of large tuna declined, a new method was pioneered to catch huge shoals of smaller fish, pen them in nets which are then dragged to shore and set up as fish farms. This led to a recent conversation with a chef who proudly told me he only used sustainable fish and that included bluefin tuna as it was farmed.

Let me say right here, wild caught fish is not farmed in any traditional sense, just caught and fattened and continues to deplete the oceans stocks to the point where bluefin tuna are now critically endangered.

So it was heartening to read of Richard Auffrey of the blog Passionate Foodie, who called out to Alton Brown over his involvement with bluefin tuna on the hit show Iron Chef America. To his credit, Alton responded and bluefin tuna has now been banned from the show, a small win for the fish.

In my own case, I've decided to no longer eat bluefin tuna. It just doesn't feel any good knowing that I'm helping to destroy a species of fish for a little oral gratification. In turn, I'm asking you to think about the issue too.

Don't kid yourself that because the fish is already dead, it's okay to eat, because that means a fisherman will go out and catch another and that will be dead too. Don't fall for the sustainable farmed fish argument either unless scientists actually work out how to breed tuna, until then, they are all still wild fish.

To this date, the Newfoundland fishery hasn't recovered, some 18 years on. Don't let it happen to the bluefin tuna too. 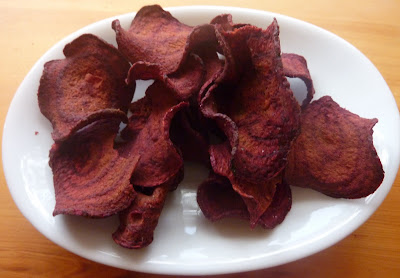 Wandering around the recent Good Food Show, I was a very happy chappy bumping into the Chipman stand, who have been making quality corn chips for quite some time.

When I first saw these colourful chips from the distance, they looked like a corn chip that an artist had been messing around with. A closer inspection revealed the concentric ring pattern and muted purple of beetroot.

Yep, genuine beetroot. Organic to boot. So I bought a bag to share with you. 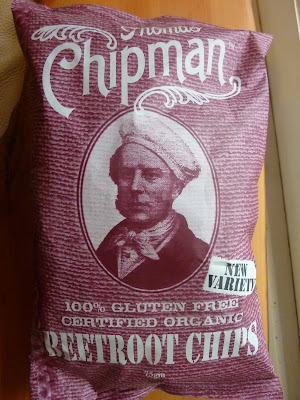 They shattered in the mouth with a satisfying crunch and there was no mistaking their beetroot birthright. The frying had certainly intensified the flavour, including the sweetness of the root vegetable.

In these days, with potato crisp manufacturers raiding food technologists' cupboards to come up with new artificial tastes, isn't it great to get a chip with the flavour already built in? A chip that is what it says it is.

And why stop at eating them by the handful as a snack? They'd make a very pretty garnish on the right dish, perhaps a winter stew, or even a dipping chip with some hommous or baba ganoush. 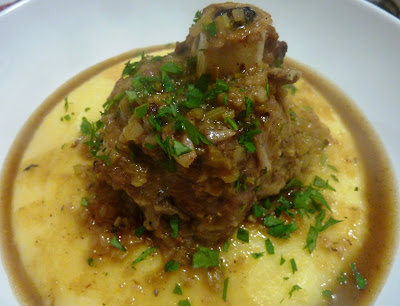 Vegetarians aside, just who doesn't love the fall apart unctuousness of slow cooked veal shank? Lip sticking, fork tender meat that melts in the mouth with a gelatinous texture that only comes from prime young steer, including the soft creamy surprise of bone marrow, waiting to be boldly scooped out of its hiding place.

No doubt, one of its finest manifestations is in the Italian dish of osso bucco, where the meat is gently braised with a sofrito of onion, carrot & celery and moistened with tomato, chicken stock and a little white wine.

As good as that is, there are some days when something a little different is needed, a pared down version still full of bold flavours. Leave out tomatoes and the colour is changed from the familiar red to what Italians refer to as bianco (white).

With so few ingredients compared to regular osso bucco, the intense flavour comes as a real surprise and is perhaps better served matched with wet polenta than the classic accompaniment of risotto Milanese.

Season the pieces of veal shin with salt and fresh ground pepper and dust in flour, shake off any excess. Melt 50g butter with all the olive oil in a pan that can hold all the veal pieces in a single layer. When hot, lightly brown the veal shanks and remove them when done.

Drain all the fat from the pan, no need to wipe it, then melt the remaining butter and sweat the onion, celery and garlic until soft, then add the drained anchovies, stirring well until they melt into the mixture.

Pour in the wine and bring to the boil and keep at the boil for a minute or two to drive off excess alcohol. Arrange the veal shanks in the pan so the marrow cannot fall out, cover this with baking paper, then the lid and place in the oven preheated to 150c. Cook for about 2 hours, pressing on the meat to see when it looks ready to fall apart.

Remove the meat and check the sauce, if it looks too thin, boil until reduced, or, it it's too thick, add some water and reboil. Check for seasoning, it probably won't need salt, just a quick grind of the pepper mill.

Serve on wet polenta flavoured with pecorino cheese and a knob of butter, sprinkle over a little parsley. 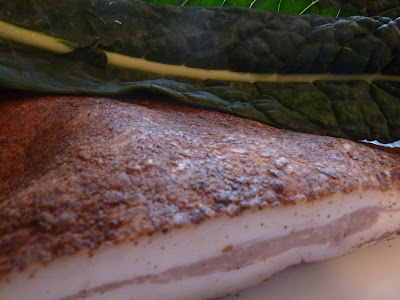 The cabbage family sure is one huge kingdom, containing as it does green and red cabbages, cauliflower, broccoli, brussel sprouts, collard greens, kohlrabi and kale.

Some think kale to be a forerunner of modern cabbage with its leaves growing separate from each other and not forming the more familiar head. Members of the kale family tend to have tougher leaves and a stronger earthy flavour, with an iodine like character.

Cavolo nero or black cabbage is one particular kale that has become more fashionable lately; Ruth Rogers and the sadly departed Rose Gray of the Italian influenced River Cafe were particular champions of this unique handsome vegetable.

One thing that all members of the cabbage family share in common is an affinity for pork, especially fatty pork. Europe is awash with dishes that combine these two ingredients, think sauerkruat, cabbage rolls, garbure and cassoulet to name a few.

One race of people who have put their particular stamp on all things piggy are the Italians who happen to be masters at curing various parts of the animal, wasting nothing. They even take the cheek of the pig and cure it to make guanciale; with a gently sweet taste, it's considered the traditional choice for a classic pasta alla carbonara.

So it seemed only natural to not only marry these two ingredients, but to conduct the ceremony in an Italian accented risotto, the cooking time of which softens the cavolo nero perfectly but retains its deep flavour and colour. 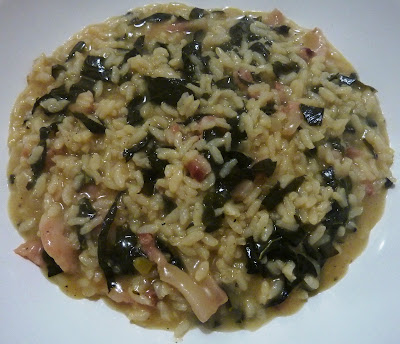 Guanciale can be a trifle hard to source, pancetta, which is more widely available could be substituted. The centre rib of cavolo nero is super tough and needs to be stripped out.

Melt 1 tablespoon butter in a large pan, add the finely diced onion and sweat until soft then add the guanciale or pancetta and cook for another minute. Add the risotto rice and toast for a minute or two, stirring all the while, then add the white wine and cook until all the wine is absorbed, add the cavolo nero.

Put a couple of ladles of chicken stock in the pan and cook until almost absorbed, then add another two ladles and give the pan a stir. Continue in this way until the rice is cooked to your liking, about 20 minutes. If you use up all the chicken stock, just add some boiling water instead.

Turn off the heat, add the remaining butter, the pecorino cheese and stir in. Season to taste and serve in bowls.