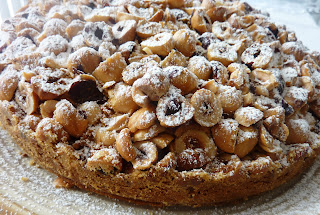 This very pretty cake has a special place in my repertoire, being the very first thing I ever baked for my wife. At the time, there was no knowing that one of her favourite nuts was the hazelnut, so proving a fortuitous choice, no?

The funny thing is though, that first one is not the same as the one I bake today, through a simple error of not following the recipe instructions exactly; however, the resulting cake turned out much better than the original.

It transpired I'd forgotten to halve the fat enriched dry mixture, used to line the baking tin as a base for the cake batter, made with the other half and all the wet ingredients.

This mistake of a cake had a much nicer crumb, quite dense but also very moist and heady with the rich spice like character of brown sugar 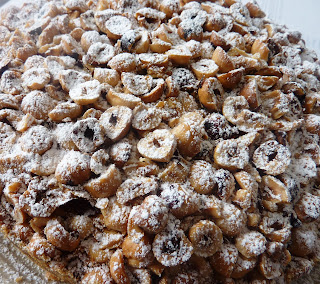 The other deviation, made on purpose this time, was instead of coarsely chopping the nuts, each one was painstakingly cut in half, dramatically lifting the presentation.

In a bowl, mix together the brown sugar and flour and rub in the butter until the mixture looks like coarse sand. Spread half the mixture in the cake tin if you want to follow the original recipe, or simply whisk the sour cream, baking powder and egg and add to the bowl containing the pastry mixture, mixing well. Pour this into the cake tin and spread evenly. Evenly sprinkle over the chopped hazelnuts and bake in a 180c oven for about forty minutes.

Leave to cool in the tin, then invert onto a plate, so that the hazelnut topping is uppermost, sprinkle with some icing sugar. 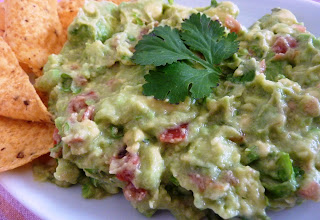 The Salad Leaf
It was a pub, a pub with fine dining pretensions along with a very positive review by a well respected local blogger.

The interior was definitely upmarket and the food eclectic with many interesting notes.

We ordered and the meals came - in line with everything we'd expected.

Except for one thing, the stowaway hidden in the glistening tangle of my salad.

Fortunately, thank goodness, it wasn't animal, or happily for my dental health, not mineral, it was entirely of the vegetable persuasion.

Okay, it was a salad, but the dry elongated gum leaf had no right being there and I could eat no more of it. Mistakes do get made; it was what happened next that interested me.

After alerting our waiter, she said she'd let the kitchen know.

Not another word was spoken about the recalcitrant leaf from that point on, no apology, no comping the meal, no offer of an extra to make up for the uneaten salad.

What would you have expected the pub to do under the circumstances? 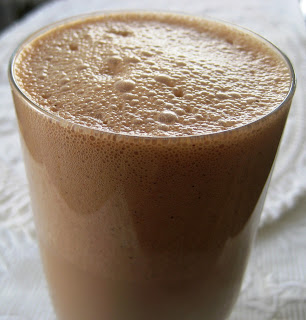 It kind of happened the stinking hot day I wanted an iced coffee but probably had too much time on my hands while waiting for the freshly brewed pot of espresso to cool - a series of 'what if?' moments. 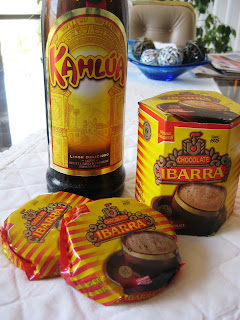 Mexican chocolate is quite a different animal to European chocolate, earthy and funky, spiced with cinnamon and contains coarse undissolved sugar crystals. It's really made for drinking and cooking and needs to be properly melted to dissolve the sugar, but makes for a superior drink.

Kahlúa, also hailing from Mexico, needs no introduction, other than as a coffee liqueur and indispensable ingredient of a Brown Cow. 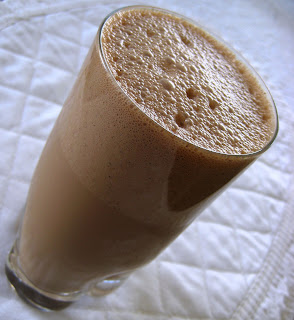 Put them together and the result is a pretty impressive long cool rich drink with a frothy top, just like its namesake, mochachino. The shot of Kahlúa turns it into an adult drink, but there wouldn't be a problem with leaving it out and serving to grateful thirsty teenagers.

You do need to plan ahead though, as the coffee and Mexican chocolate need time to chill.

1 cup brewed coffee and melt the chocolate in 1 cup of hot milk until completely dissolved. Cool, then chill in the fridge.

In a blender, place the chilled coffee and dissolved chocolate, the rest of the milk, icecream and Kahlúa if using. Blend for a minute or so until nice and frothy. Serve in tall glasses. 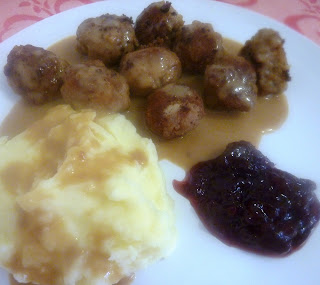 Sometimes, I wonder if the allen key was invented solely for the use of Ikea, so ubiquitous a tool it has become in assembling their range of furniture. Ikea, king and master of the flatpack, as you all probably know is based in Sweden and have continued on the ancient Viking tradition of conquering the world, with container ships serving as modern day longboats, sailing to every corner of the globe.

We are regulars at the Richmond store, not so much these days for the furniture or homewares but for our fix of meatballs in cream sauce with mashed potato and lingonberry sauce which seems to have garnered something of a cult following if the queues of people are anything to go by, or from the mentions of other bloggers.

You can also buy the meatballs and all the fixings to prepare in the comfort of your own home from the Ikea pantry, which is well worth a visit in its own right for the range of classic foodstuffs from Sweden, things like dilled crayfish and elderflower syrup for instance. Not forgetting the crispbreads either.

It was on one of our foraging trips that we came across the Ikea's Real Swedish Food Book, which, as luck would have it, contained the recipe for meatballs in cream sauce. Now, as good as the restaurant version is, anything home cooked has got to be better, if not a little more trouble.

Here's what Robert Jakubek, Ikea's Chef de Cuisine and product range manager has to say about them.

"Meatballs have to be just the right size - not too big and not too small - and served with a real cream sauce. Not much pepper in the sauce, but plenty in the meatballs themselves. I never tire of them.


One good thing about meatballs is their many uses. Warm, cold, in baguettes, in ordinary sandwiches, perhaps with salted gherkins. Perfect with apple chutney, with a little chilli and moussaka. Or with an ordinary potatoes au gratin.


But the real classic, of course, is meatballs with boiled potatoes, cream sauce and lingonberry jam. An unbeatable combination!"

One thing we noticed right away is how those crafty Swedes stretched out the meat with the addition of boiled potato which also lightens up the texture, making them very moorish. Real Swedish comfort food.

Fry the onion in 25g butter until just golden. Mash the potatoes and mix in the onion, minced beef  & pork, the egg, cream & water, breadcrumbs and season to taste with salt, fresh ground pepper and a pinch of ground allspice. Mix well with your hands, it should be fairly moist.

Shape the mixture into meatballs either with floured hands or a couple of spoons dipped into water, placing them on a floured board as you go. Melt the remaining butter in a frying pan with a little oil and gently brown the meatballs until all are cooked. Serve with cream sauce, mashed potato and lingonberry jam or cranberry sauce.

Pour the beef stock or water into the frying pan in which you cooked the meatballs and deglaze. Strain the juices into a small pot, add the cream, a dash of soy sauce and season with salt & fresh ground pepper and bring to a simmer. If it seems a little thin, add the cornflour slaked in water and bring back to the simmer until thickened.