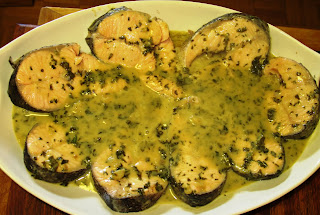 
Fashion: 1. style considered as a standard of taste.

It's ever present in our lives, kind of a way of showing that we belong, especially with others who share our taste, whether in clothes, cars or even the food we eat. For food has long since passed from a way in which to sustain ourselves, into a form whereby we gain pleasure from the way the things we eat are prepared.

The French have a long and proud history of good eating and one of their early organisers of strict methods to produce haute cuisine, an ancient forerunner from which many of our current food trends derive, was Carême.

In the early nineteenth century, he evolved a system of sauces based upon fonds de cuisine or stocks. From these he produced all the sauces that were the crowning glory of French cuisine: Names like espagnole, allemande, béchamel and velouté,  known as mother sauces, which gave birth to endless variations.

But fashion eventually held sway and many of these sauces have all but disappeared with perhaps the notable exception of béchamel. A real shame, as these sauces have great depth of character, but the making of the roux, a simple blend of butter and flour, perhaps for health reasons or just that of speed, is possibly behind their premature demise.

One sauce due for a fashion revival is the velouté; a stock, whether of fish, chicken or veal, that is gently thickened with roux, the advantage of which is to give body without the need for reduction, which can over emphasis flavours to the point of harshness.

What you get is the pure gentle flavour of the stock you have used.

One of the easiest and simplest stocks to make is fish. A few bones and aromatics and 30 minutes later you have a finished product. From there it's just a small step to a wonderful sauce that has plenty of wow factor.

Melt 25g butter in a pot and gently sweat the shallots until soft. Do not allow them to colour. Add the vermouth and white wine, bring to the boil and reduce by half. Add the fish stock and simmer for 5 minutes, then strain the liquid.

Clean the pot and melt the other 25g butter and add the flour. Gently cook for a few minutes without colouring, then take from the heat. When cooled slightly, whisk in the fish stock, a little at a time, until completely combined. Put back on the heat and bring to the boil, simmer for a minute then add the cream and simmer for 5 minutes. If it looks too thin, simmer for longer to reduce a little. When ready to serve, add the shredded sorrel and a squeeze of lemon juice and simmer until the sorrel is just wilted.

Serve with fish, poached salmon would be an excellent choice, stand back and wait for the stampede of compliments that will come your way. Send a silent prayer of thanks to Carême. 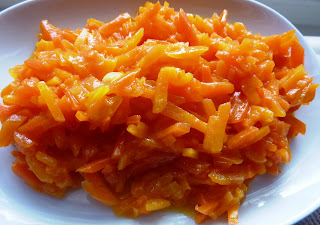 All of us know and love this vibrant root vegetable, which these days no longer just comes in ubiquitous orange, but also the more novel varieties of purple, yellow, red and white.

The carrot is much loved in many cultures and forms an indispensable part of many dishes, from a foundation flavour in stocks, through to an ingredient in its own right.

Because it is at once so familiar, it has become somewhat mundane.

Everyone has eaten boiled carrot, de rigueur in the staple meat with three veg diet, but that is nowhere near the end of the story for this versatile taproot. There are many ways of preparing it, but none that so much concentrates the flavour by braising in butter, a very Polish thing to do.

Okay, butter is the heart attack bogey in all this, but there is a study suggesting that chopping and cooking in oil will significantly increase the amount of carotenoid taken up by the body.

So the news isn't all bad, right? Especially when you consider that butter not only intensifies the flavour of the carrot, but sweetens it as well. 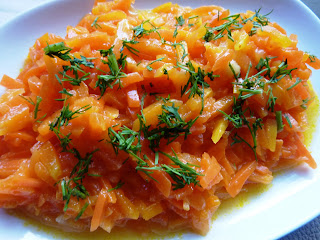 Place the grated carrot, butter and water in a pot, bring to a simmer and braise the carrots until just tender, 10 to 15 minutes. Sprinkle the plain flour over the mixture and stir in, just to thicken everything slightly. Simmer for another minute or two, transfer to a serving plate and garnish with a little dill if desired. 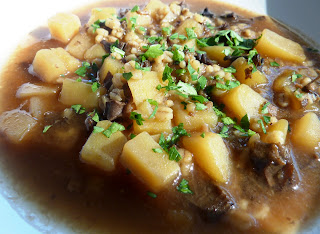 A well known television chef was recounting a visit to a regional restaurant in Italy. When he asked what was in the risotto, the answer was just a little good stock.

All home cooks and chefs alike know the value of home made stock.

It has a flavour and body that no multinational corporation has yet been able to put in a box. No doubt, in a busy kitchen, shortcuts can and do get made, it's the nature of our time poor society. But, when the chance presents itself, there is nothing quite so satisfying as simmering some bones, vegetables and aromatics, the alchemy of which results in a wondrous flavoursome liquid.

A recent dinner party collided with a day at the footy, so my wife was pretty much left with all the cooking. Her only request was for some homemade chicken stock before I left. I'm a firm believer in using all parts of the chicken, frames, wings, feet and giblets, though not the liver. If all you can get your hands on is some chicken wings, a decent stock can still be yours too.

There are so many recipes for chicken stock that I won't bother with one here, but I will tell you how to make the soup. 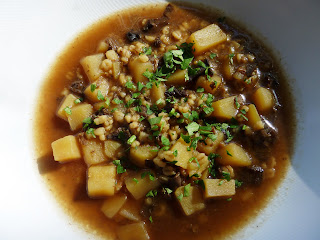 For every litre of chicken stock:

Place the chicken stock in a pot with the barley, porcini and reserved cooking water and bring to the boil, reduce the heat and simmer until the barley is soft, about 30 minutes. Add the diced potato, season with salt and fresh ground pepper and continue to simmer until the potato is soft, about 15 minutes. Check the seasoning again as the potatoes will take up some salt.

Ladle into soup bowls with a little cream if desired and garnish with the chopped parsley. 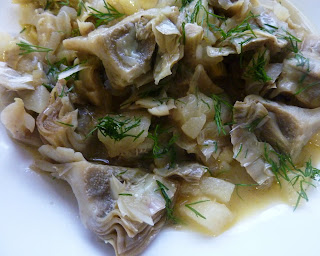 Cooking inspiration can strike in many different guises, you might be reading a food magazine, shopping at the greengrocer or butcher, or perhaps, better yet, your better half had recently visited a farmer's market and come back with a mystery bag of ingredients.

Which is kind of what happened in this instance.

Together they sat on the kitchen table, maybe a little incongruously, but side by side nonetheless.

I watched unthinkingly for a couple of days, until it dawned that due to a lack of attention from the purchaser, some kind of artichoke action was expected from me. They're a bit of a favourite around these parts and one of the first vegetables to signal the arrival of spring. However, deep into autumn and artichokes really live up to their name, with the flower pistels far more developed and ready to make you choke.

Ever see a cat cough up a furball? If you eat late season artichokes, not properly prepared, that could be your fate.

Of course, those who love this flower bud from the thistle family, gladly trim back all those tough leathery outer leaves, to reach the tender heart and blithely scoop out any offending choke. The truth is, more artichoke is actually discarded than what is ever eaten.

It's kind of the opposite of cabbage, whereby a few manky outer leaves and the insignificant solid central core hold no culinary promise. But the leaves are real social butterflies, happy to partner up with whatever else is to hand, they gorge on fat, swoon with pork, have a swinging time in a minestrone and a secret love affair with apples, especially long simmered red cabbage with apples.

One thing cabbage and artichokes have in common is they both don't mind a bit of sharpness, a necessity with artichokes to stop them from browning. But consider red cabbage with apples, where a bit of vinegar is vital, not just to set the colour, but also to balance the sweetness.

So, if artichokes like a bit of acidity, would they behave like red cabbage and become more rounded with a bit of fruit sugar? 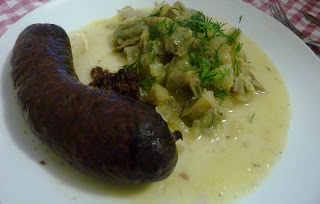 Pears and artichokes sound an unlikely partnership, but they really do work. This is one dish I'd like to see you give a shot, a dish of few parts that is greater than its sum. For black pudding lovers looking for an alternative to fried apple, this is for you. Otherwise, a pork chop would go well.

Strip all the tough outer leaves from the artichokes and cut of the top third or so of remaining leaves. Cut each base into quarters and scoop out with a teaspoon any hairy choke. Place in a bowl of water in which you've squeezed the juice of a lemon to stop any browning.

Sweat the onion in the olive oil until soft but not browned. Add the prepared artichokes while still wet and simmer for a minute or so. Add the diced pear and white balsamic, then season with salt and fresh ground pepper.

Place the lid on the pot and simmer for about 30 minutes, check for water if necessary and cook until the artichokes are soft. You may need a splash more of vinegar. Add the chopped dill and serve.