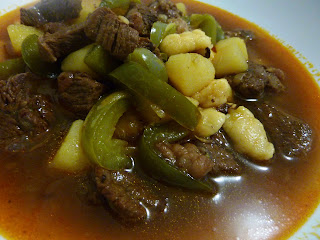 One of our firm winter favourites would have to be goulash soup. Not only very filling but extremely tasty to boot. It's also one of the few soups where we are happy to use just water as the liquid, just as the herdsmen on the Great Plain of Hungary did for centuries.

No doubt, a well made stock wouldn't be wasted, adding another layer of flavour and some body, but hey, sometimes it's a bonus knowing there isn't any extra cooking.

We've tried a few different meats, but have settled on oyster blade as it has a good amount of gelatinous connective tissue plus a bucket load of deep beef flavour and doesn't take too long to cook.


Cut meat into cubes. In a large casserole or pot, heat lard or oil and saute onions until transparent. Add beef, paprika, salt and caraway seeds and continue to saute for 10 minutes, stirring. Add tomato paste and water, simmer for 30 minutes and add potatoes, cook for 15 minutes. Add pepper strips and csipetke and cook for 10 minutes more and serve.

In a bowl combine flour, salt and egg. Knead until a stiff dough is formed, adding water if necessary. Flatten the dough with the palm of your hands until 1 cm (1/2") thick. Pinch off 1 cm (1/2") pieces of dough, squeeze them flat with your fingers and drop into the simmering soup. 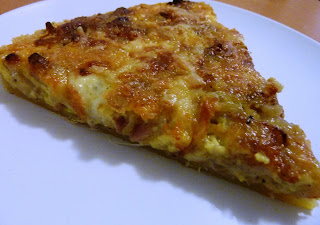 It's funny how inspiration can strike.

Someone had produced a quiche Lorraine on the telly, the prince of quiches, a dish that gets a run around these parts from time to time. What's not to love about the combo of cheese, bacon and sweetly softened onions, a French classic.

It got me thinking though. How would an Italian adapt the recipe to display an altogether different heritage? I'm pretty sure I'll never die wondering about concepts like this.

Replacing the bacon with guanciale, the cured cheek of a pig, seemed logical enough, as did substituting fontina for the gruyere cheese normally used.

But what about the onion, what could you use instead of this kitchen staple, a vegetable that sings out in Italian? 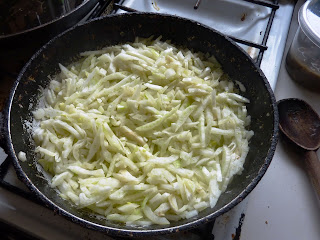 Fennel fitted the bill admirably, behaving similarly to onions by sweetening up as it's cooked down, whilst still retaining its slight aniseed character. 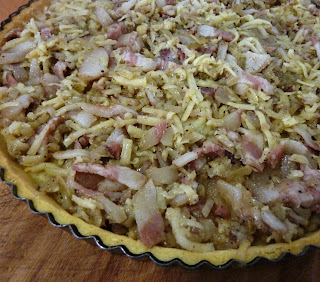 just fill a prebaked pastry case with loads of goodness! 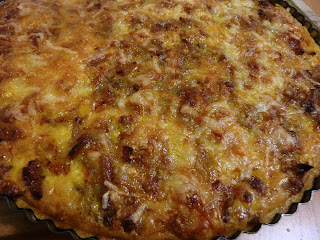 Don't blame me, the aroma wafting from the oven was so divine, I could barely wait for it to cool. In fact, I didn't. Did it have an Italian character? Well, you'll have to make it to really find out, but here's a clue...

Line a flan ring of about 22cm diameter with the shortcrust pastry. Prick the base all over with a fork, line with foil or baking paper, fill with baking beans and bake in a 200c oven for 10 minutes, then remove the beans and foil and bake for another 10 minutes or until well browned.

Melt the butter in a frying pan and slowly sweat down the fennel and onion with a little salt until completely softened, but not browned. Add the guanciale or pancetta and cook until it just changes colour. Cool.

In a bowl, whisk the whole eggs, yolks and cream until just combined, season well with salt and fresh ground pepper.

Fill the cooked pastry case with this mixture and pour in the whisked cream and eggs. Sprinkle the remaining fontina over the top and bake in a 200c oven for 40 minutes or until well browned. Serve warm or at room temperature.