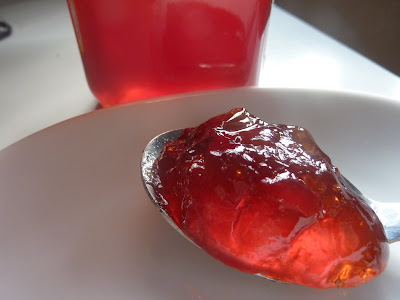 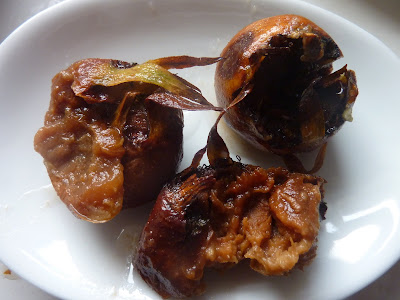 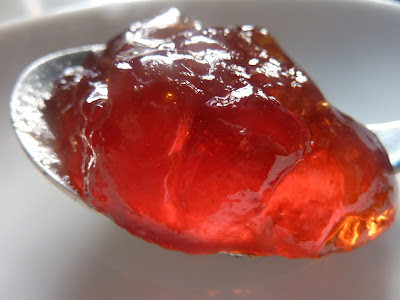 I wonder how many medlar trees are in old farm orchards that get pulled out because the new owners don't know what they are, and haven't a bletting clue what to do with them?

I know where a couple of trees are that the owners wouldn't use, but they wouldn't let me take the fruit!

I had a medlar tree in our last place, in the Vendee. Not a clue what to do with those ugly things, though, and with all the plum, cherry, peach, apple and pear trees I didn't bother figuring it out.
In cosmic justice I don't have a single fruit tree here - not even an bletting medlar. What gorgeous jelly!

Beautiful pic and post. Now if only we could leave a few hardened individuals to blett for a few weeks, I wonder what riches they'd yield?

Very nice pictures Neil. Some of the best foods take time and patience to reveal their inner beauty and the rewards are great to those that persist.

Thank you Neil for letting me try it... two thumbs up, awesome taste. I grew up having Medlar at the end of Autumns, especially for Yalda nights in Iran.

Oohh, the top pic makes me want to try some...

Tried as a boy in the UK, and can still taste them to this day. I'm gazing at my first fruit on my "Dutch" medlar ex Victoria - can't wait! Iguess there is a lot of things that we are forgetting from our Grandmothers - the jellies that went with meats, the joys of suet, real sauces ... all made in real time. Thanks,
Phil Green Albany WA

Hi phil, thank you for your wonderful comment. Hope your first crop works out well, indeed, the first taste is never to be forgotten.

An older and wiser jam maker here in central Victoria does not blett her medlars but slow cooks them down, similar to quinces then proceeds to make her jelly. It is fantastic.

Does anyone have problems with getting the jelly to set? I'm using the amount of sugar in the recipe - have even reboiled with extra jam sugar but still can't get any set.