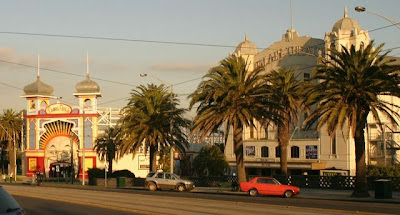 
There is a terrible secret about someone who has been a resident of St Kilda for ninety-five years. You can see his face just to the left, waiting for his meal to come walking by. He is St Kilda's dark secret. You see, Mr Moon is not only the hungriest person in town, he is also a cannibal. Every week he devours thousands of men, women and children, alive. 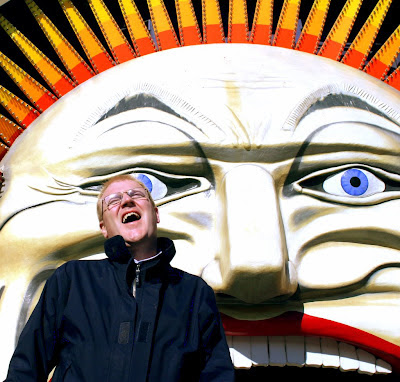 Here is a shot of a local resident being eaten alive! His hunger for humans knows no bounds.

Here is Mr Moon on a feast day, gorging himself sick. Is there no end to his gluttony? Well fortunately, Mr Moon in common with most St Kilda residents prides himself on his looks. Even though he will gobble up every last person he sees, Mr Moon suffers bulimia. Every person eaten is usually disgorged by the end of the day, none the worse for it.

Unless they had lunch before going on the Spider.

Good golly miss molly!! What a cool mr moon! Sweet that he has bulimia!

Hi tanna, yes, it's a happy ending for everyone.

Hi kitchen hand, when I took my kids to Seaworld, we rode the pirate ship and corkscrew rollercoaster about that many times. You don't feel quite so sick at the end as you do at the start.

I am decidedly greener 'round the gills just for having read the last two comments.

Haha I love this post. The photos are great! What a glutton you are, Mr. Moon! :)

Very funny Neil. Tickled my funny bone you did.

Hi cindy, I don't blame you.

Hi christine, yep, he's been gobbling them down for ages.

Hi squishy, glad you liked it, tickling is free.