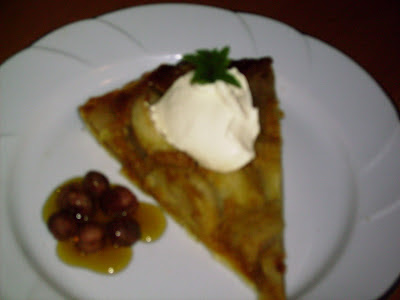 Well, here it is, my first ever food photo and the way I see it, the only way for me is up.

Okay, this is my entry to Sam's event, Fish & Quips or English food is not a joke. Can you guess which part is the English food? Hard to say really, the photo is a bit fuzzy and you would really have to use your imagination, 'cause a series of disasters struck, making my original intention, shall we say...beyond my limits of endurance, even despite my willingness to cheat as much as possible!

Imagine there's no heaven
It's easy if you try
No hell below us
Above us only sky
Imagine I plotted
To give you cream so clotted...

Yep, that's it, clotted cream was to be my go and I suppose I could tell you that there is a nice fat scoop of it atop the apple tart, you'd never be able to tell, now would you. The truth of it is, I actually planned to make the real, live, genuine article from very hard to get unpasteurised milk, which I bought from a farmer's market just before Easter. But then with Easter and all the preparations for that, it got pushed back, then our holiday arrived and it got pushed back again. No worries, I thought as soon as I get back, but I think you can guess what happened next, just think unpasteurised, that's right, only sour milk greeted me on our return.

Well, you know how it is, once you start to scheme, you just get in deeper and deeper. Off to market, I thought, so on Friday - the deadline - I grabbed M after school and to Prahran Market we went, only M wasn't seeing the shopping caper the way I would have liked and felt that we should be just shopping for her, which led to a series of mini crises, that you might like to call tantrums and in between sadly shaken heads, no, we don't have any clotted cream, and M's anguished cries, I abandoned that plan and decided that some top quality double cream would just have to fill in for the clotted cream.

In hindsight, it might have been better to persevere at the market, for at the supermarket M unleashed a tantrum of such epic proportion that not one but two people came over to ask what was wrong, and though I can say my resolve to produce the goods never faltered, it had to be helped somewhat by a bottle of wine I bought purely for self medication.

Wonderful, thick, rich, clotted cream, a by product of those old days when farmers would sterilise their unpasteurised milk slowly on the stove top in order to improve its keeping properties and discovered a layer of cream with a crust on top that was really flavourful, with a hint of caramel. Well, we can't just serve up a scoop of cream, it really needs a dance partner and what could be better than a simple apple tart, okay, the recipe is French, but I did have a secret stash of Cox's Orange Pippins, that most English of apples. Now I know the French like to look down their noses at English food, but I'm sure I know at least one Frenchman who doesn't mind something English on top... 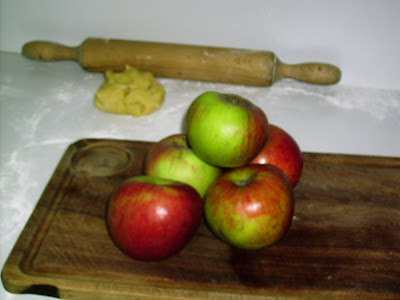 So here are my precious apples, so hard to get in Australia unless you know someone. I'm not going to give the complete recipe here for the tart, that can be another post (yes Reb, it's coming), this is the clotted cream's day after all, suffice to say I peeled the apples, slowly cooked them in some butter, sugar and spice until half cooked, removed them and boiled down the remaining juices until caramelized, mixed in some cream and egg yolks, arranged the apple segments in a blind baked tart case and poured over the caramel, then baked it in the oven till set. What you can't really see in the top photo is that beside that tart are some fresh hazelnuts (cracked them myself) drizzled with golden syrup. So you see, I was pretty much thinking English all the way. 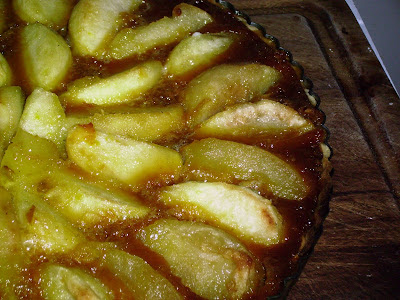 Looks yummy, doesn't it? But what really makes it is the, ahem, clotted cream. If only I could have made that.

Labels: English food is not a joke, fish and quips

Exceptional...I really enjoy the small slice of such an honest day, a totally glorious apple tart and a glass of wine! Just makes all right with the world!
I'm so happy for the photos - the rolling pin is a beauty with the apples!

Congrats on your first food post with photos! Tanna's right, the one with the rolling pin and apples is quite nice (and I'm glad to see that I'm not the only one who makes sure that her bench is *very* well floured when working with pastry!) :D

Congrats on the first food photo!

My first shots were anything but stellar, but once you've got a bit of practice, it gets much easier.

If I may make a suggestion, check to see if your camera has a macro mode setting. It'll give a much clearer photo for close-in shots, though it does require a steady hand.

Alas, as an American I am completely unfamiliar with clotted cream, but I would like to thank you for not delving too deeply into the baked bean pizza!

(Wolfgang Puck has done enough to damage the pizza's reputation in the U.S. already)

Hmmm... I must still be pretty tired! The previous comment is mine.

Where DID you get those apples from??

Proof that English food is no joke! And don't feel bad about the pictures...I am only learning the whole photography thng, and for me, cooking and writing is easier!

Hi tanna, thanks for your encouragement, the shopping really didn't go well, but I think two steps forward, one step back...

Hi ellie, thanks for that and I'm glad you liked the apple shot. I'm a touch disappointed the service shot didn't work out so well, it looked real nice on the plate.

Hi jerry, thanks for the advice, I'm currently looking for the instruction booklet, I do know the camera has a panorama setting, fingers crossed it has a macro one as well.

Hi stephanie, I got them from Farnsworth Apple & Cherry Orchard in Red Hill, in fact I got the entire crop this year as the trees are still young and not producing well, though I will say if you are down that way, the orchard is well worth a visit, it's on the same road as Paringa Estate, just a bit further down. I have seen them elsewhere, but I can't quite recall if it was Prahran market or the St Kilda farmer's market.

Hi deborah, I am so with you on the cooking and writing being easier, what a slippery slope I've just fallen down!

You know, Neil - I attempted my frst batch of homemade clotted cream recently and it is clear I need loads more parctice. At least you can get King Island in Oz - much better than any cream the US has to offer.

thanks for taking part!

everything looks delicious! congratulations on the photos :) Have a tasty week...

Hi sam, at least you had an attempt, I didn't clear the first hurdle. How did you know I used King Island? Great stuff too.

Hi melissa, thank you, it was along time coming. Love your new look too, are you a redhead now?

OMG, clotted cream. If anybody ever needed proof that English food is no laughing matter, clotted cream is it. If I were on death row (heaven forbid!!) clotted cream woudl make up a large part of my final meal ;-) Great post - and congrats on the photos!!