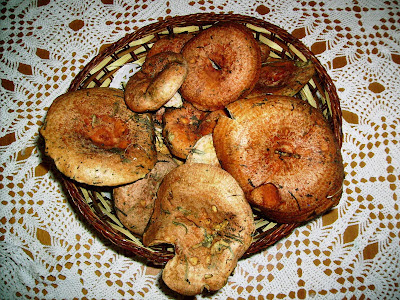 I'd have to admit to the teeniest bit of jealousy when looking at Cook Sister's! photos of new season morels, why can't it be spring here? Well, the reality is that it's autumn and that means mushrooms too. The above photo is of a few saffron milk caps (Lactarius deliciosus) that were picked a couple of days ago near Buxton, after some recent rain, with more rain due today. So it looks like the mushroom season is about to fire up. Hooray!

After morels (Morchella spp.), saffron milk caps are the most desirable mushrooms that grow in Australia. They are in fact not native but came here attached to the roots of pine trees with which they have a symbiotic relationship. With all the pine trees growing everywhere, it's not at all hard to find them nestling in soft beds of fallen pine needles, or even the grass verging close by.

They are rather firm textured and without a pronounced mushroom flavour, even though they are a wild mushroom. These are keenly sought by mushroomers, especially those from Europe along with slippery jacks (Suillus luteus) which tend to come along before the saffron milk caps, but they can be found growing together.

There are a number of ways to cook them, with perhaps the best being to simply clean and flour them whole and fry in some hot oil. We also make a mixed mushroom ragu and other times, like last night, we sliced and fried them with onions, which we served with plain boiled potatoes and Polish style black pudding. What made the black pudding Polish style is the use of kasza (kasha), which refers to grains of all sorts, our pudding was stuffed with barley and buckwheat is also popular.

I don't advise that anyone should rush out and start picking wild mushrooms willy nilly, you really have to go with someone who knows about the target species, people have died from eating mushrooms they thought were safe. If you scan the food sections of newspapers you can often find mushroom trips being run by experts, these would be a great place to start.

The morels should be popping up here soon, I can't wait!

Must eat more mushies ... I saw a mushroom stew recipe the other day and now I've forgotten where it was. Someone's blog?

I love saffron milkcaps simply fried in butter and sprinkled with some flaky sea salt! I picked quite a few last year.
In theory, morels should grow in Estonia, too, but I never seen one. However, we're off to a forest in 8 days and will be specifically look for morels..

Oh, I'm so jealous! I've never been mushroom-picking before but it's definitely something that I'm positively aching to try! I'll keep my eye on the papers for these tours you mentioned - any hints as to which papers I should be checking? :D

P.S. Apple tart went down an absolute treat with the family! No clotted cream, but a spot of whipped cream was quite lovely :)

Oh wow - how wonderful those look! We are going back to Borough tomorrow and this time I will definitely get some fresh Morels. Yummmmm. I have never been mushrooming - too many years of my parents assuring me that any mushroom I picked would kill me I guess ;-) - but the older I get the braver I get, so maybe it's time.

Nick at The Tracing Paper said...

You've given me some inspiration ... I might have to head bush to try and find some ... although will look for an expert too! If we get the rain forecast this weekend, perhaps there'll be some good crops?

Gosh Neil it's so strange to click your RSS and find PHOTOS! Hooray!
Love the mushrooms! Wish I could get some of those here, well I should be happy because we can get a great number.
My dad used to go mushrooming and it drove my mom nuts. She wouldn't let any of us kids have any but dad would cook them and eat them! I've gone with my sister-in-law and it was really fascinating, loved it.

Onions and and potatoes yum. Found some in Albert Park a couple of weeks ago - fried in oil - great. Check out the Little Hungarian Restaurant in glenhuntly road if you haven't already - for the goulash and boiled potatoes

I love mushrooms! Don't know enough about them and have never even heard of saffron milk caps until today. Sigh. Must go to farmer's markets and be on the lookout for wild mushrooms..

mushrooms and potatoes for dinner sounds fab! not sure about the black pudding though.. perhaps that's another thing I should put on my "to try" list.

do these mushies go by a different name in the markets? like something with pine in it? i'm sure i've seen it before and it feels kinda slimy with orangey bits of colour.

Hi brilynn, I know what you mean, it's always exciting when you know the mushrooms you want are coming.

Hi kitchen hand, mushroom stew sounds great, isn't that the problem sometimes when you forget to bookmark a recipe?

Hi pille, we had ours fried in oil but I reckon the butter would be excellent. I know morels grow in Poland so one would think you ought to have them too.

Hi ellie, I have seen the tours advertised in The Age's Epicure section, it might be in their EG on Friday too. Glad the tatr worked out, I reckon you have the luckiest family alive.

Hi jeanne, you haven't lived (or died) until you go mushrooming. Hope those morels are as tasty as they look.

Hi nick, you have to know I'm extremely jealous of all the different European mushrooms, you guys are spoiled for choice, you lucky lot.

Hi stephanie, we were just talking about how there should be a flush after this rain, if you have time head down to the Peninsula and look around the pine trees.

Hi tanna, a mushroom hunt is great fun, aal the excitement when you finf your quarry. I'm not sure what to make of your mum only letting your dad eat the wild mushrooms, lol!

Hi michael, I'll look out for that restaurant, the one we go to is in Glen Eira Road, thanks!

Hi ilingc, sometimes you have to be brave...

Hi cin, some people do call them pine mushrooms, but I'm not sure if that's a name for all mushrooms that grow under pines or refers to a single species. The common names I've given are the generally accepted ones but for accuracy I also included the scientific name, one can't be too careful with mushrooms. The mushrooms you are talking about are almost certainly slippery jacks, the slime is the reason for the name, underneath it looks golden and spongey. We prefer to slice and dry these for use later on, rather than eat them fresh.