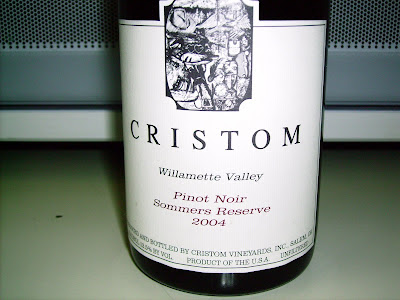 Well it's not every day you turn fifty, so a special bottle of wine was in order. We were having Polish style roast duck - the bird was well seasoned with salt, pepper and marjoram, then stuffed with apples also seasoned with marjoram. Of course the classic wine partner for the gaminess of duck is pinot noir and because I only occasionally buy top end wines, I asked for the advice of Prince Wine Store.

Being a vague sort of Pinotphile and knowing their wine list I was half expecting a Premier cru Burgundy or perhaps something new world from New Zealand. As much as I like Australian pinot noir and although they are very drinkable, our wines seem somewhat simple compared to those from these two countries...the X factor just isn't there for us, except for two, maybe three producers. When you're talking about pinot noir, it is the X factor you're constantly searching for, there is something special about this grape variety that separates it from all others and makes it unique in the wine world.

It is the combination of terroir, vineyard management, winemaking skill and time in the bottle, that when it all comes together, makes you sit up and go wow like no other wine can. In a way it's unexplainable, but when you drink a great bottle of pinot noir, you just know that this is God's second greatest gift to mankind.

So when Michael McNamara suggested a Cristom pinot noir, a highly regarded producer from Oregon, USA, it was a bit from left field. I have never had an American pinot noir before, but then again, I had never turned fifty before either, so what the heck, the reason you ask for advice is so you can act upon it and I duly purchased a bottle of the Sommers Reserve from Willamette Valley.

At 13.5% alcohol, it is well within the range I look for in a wine, being no fan of much above 14%. The colour was a light brick red in the glass and on the nose were some spice and briar fruits. The first taste was amazing, the briar fruits were there along with a spicy cherry essence. The flavour kept building in the mouth and was well defined by fine textured tannins. There was immense power in the wine along with tremendous length, the taste lingered long after I swallowed, this was serious stuff indeed, not one for quaffing.

There are some pinots that gain their character from a forest floor kind of gaminess that you either love or hate and even though wild yeasts were employed in the fermentation, the Cristom has avoided all that and made a wine of great purity and finesse. Now having no experience of American pinot noir, I can't say what the aging potential would be, but guessing from what I had, ten years plus would be no surprise. In fact the only criticism I had and it's hardly that, is the wine I drank was too young.

Will I buy American again? You bet.

I remember my first taste of a really good - I mean really good, not raspberry lemonade with a kick - pinot noir. It was a revelation. They're hard to come by without forking out. Happy birthday again.

So glad to hear you had a great bottle for the 50.
I'm out the door this minute to ... Portland ... wonder if I might find this one!
Have a Happy Day after!!

Great wine. Who'd have thought the
Prince would suggest an American one?

Hi kitchen hand, I well remember mine too, though happily I didn't fork out too much, nor did I have to age it. It was a little French number that I bought at auction.

Hi tanna, hope Portland is great! Well if I can get it in Australia...

Hi lucy, I was glad too, but it was probably the furtherest thing from my mind. It goes to show it pays to be open to new things.

Happy belated birthday. I can just see my friends going.. what american wines?? maybe i'll get one, one of these days.. just to see how they react ;)