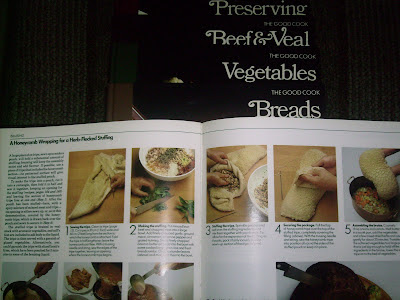 I've been collecting the TimeLife series The Good Cook for nigh on twenty-five years and finally my collection is complete. It was first published in 1978 and there were both English and American editions. The chief consultant for the series was the legendary Richard Olney, plus a host of other well regarded consultants including Jane Grigson, Michel Lemonnier, Alan Davidson et al. It wasn't the first cooking series that I'd collected but it is certainly the finest. Each volume is dedicated to a single topic and is very much like being in a cooking class that teaches the foundations of good cooking, step by step. At the end of each book is an anthology of recipes which are a real treasure. All the classics are included with recipes from countries all around the world.

It is this series that I would credit for much of the knowledge and technique that I now possess and would instantly recommend it to anyone who wanted a comprehensive grounding in the culinary skills, it teaches every single area of cookery that you can think of, although some of the subjects covered are no longer in fashion, it can be said that for the most part, every book is timeless, a very rare quality indeed. One of Australia's foremost cooks, Stephanie Alexander, recently recommended the offal title and it is easy to see that the idea for one of her early signature dishes of stuffed tripe may have come from these very pages.

The Good Cook 28 volume series is long out of print, but its ongoing popularity can be gauged by the thriving market for it on eBay, which is how I completed my set after originally collecting about ten titles when they were first published. You can also come across copies at second hand book stores and school fetes are another source. Wouldn't it be great if someone updated and republished the whole set? I bet there would be a market for it.

How delightful! I only have bread as pasta in that series. I have most of the Foods of The World series Time/Life put out. Never thought to look on eBay.

“We have to be aware of the verbiage with cookbooks. It's a different way of thinking. One of us always wants to add another ingredient -- then there are too many ingredients.”

Hi tanna, I'm just starting to look at that series, just what I need, more cookbooks.

Hi karin, nice quote! Most times though, I try to break a recipe down, do more with less.

My parents have a chunk of the Foods of the World Time Life series and I am going to make quite sure they come my way if the house is ever sold!! I remember leafing through the Austrian book and marvelling at the fabulous pastries as a child...

Hello
My name is Valentina, I’m from Russia and now I’m writing a thesis on translation of cooking terms and so on from English to Russian. I’ve got the Time Life series “The Good Cook: Techniques and Recipes” copies in Russian but I haven’t them in English. May be you have these books in digital form or know how where to download they from? I really need these books for my university project. Hope you can help me.
Thank you

Hi Valentina, these books were published long before the computer age, so I think you may have trouble getting digital versions.

There is an active market for this series in English on ebay, you can very often buy the whole collection for not a lot of money, but obviously, you would need to find someone who is willing to ship them to you. I had a set posted to me, so it is possible.

Great project, hope it all works out for you.