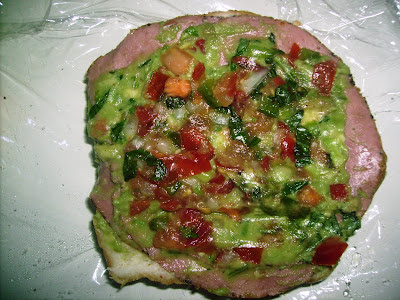 You can see I'm never going to get work as a McDonald's stylist, but really, it is the inside of a sandwich after all.


Don't you hate it when with all good intentions you put leftovers in the fridge with the full intention of using them up, but somehow there is never that appropriate moment to serve them? Then after a few weeks, just because you're not really sure when the food was way past its best, you toss it due to the appearance of some sinister looking blue-green fluff that tells you, yes, this food has had it.

I'm as guilty as anyone when it comes to this and the most difficult thing to keep is just a small amount of leftovers. You feel a bit guilty about tossing them in the bin and there isn't really enough for a serve, so they languish in their little plastic container awaiting their pitiful and ignominious end, which is hopefully some time before they actually start to smell. It must be some ingrained human trait to store good food, for it is actually quite difficult to throw out something that is still quite edible, even more so if it was very tasty as well.

Last night we had nachos and I made both the guacamole and fresh salsa. At the end of it, there were small amounts of both left over and as we started to wash the dishes, I asked D if I should turf them out. Now D really loves my version of guacamole, of which there are as many versions as there are stars in the sky and she also has a soft spot for my salsa fresca; there may have only been a couple of tablespoons of each, hardly worth the bother, but she asked to keep them.

Their fate seemed inevitable now that they were in God's waiting room.

I thought no more of it until I ate my sandwich today. There was a bit of lettuce and pastrami poking out, but as I took a bite, there were the unmistakable flavours of Mexico. Funnily, it didn't taste of either guacamole or salsa fresca but a little of both. And so it proved. D had cleverly mixed them together and used it as a spread.

That was great thinking and very tasty to boot.

I'd have to think D is a real love and perfect! and I love God's waiting room.

Nicely done to D - that's a good way to salvage those leftovers!

Hi tanna, she is one clever girl and I'm lucky to have found her.

Hi ellie, and quite the surprise too.