Recent Posts
Say It With...
Panko Crumbs
The Look
Zapraszamy Do Zabawy!
Short & Long History of Molecular Gastronomy
Heston Blumenthal - In Search of Perfection
always with me
Wine Country & A Barbeque
Al, We Need You
Pretty Shortcut

Chicken Slavinks
A little while ago, I did a post on slavinks, which are basically sausage mince wrapped around with streaky bacon. Unfortunately at the time, there were no photos, but that's no impasse to posting around these parts. Recently a jar of barbeque rub, Rod's Rub, Sweet Mesquite, came my way to try out. After messing around with it for a while and using it as it is supposed to be, with terrific results, I thought "Hey, maybe this stuff can be turned inside out" Which of course I did. So instead of just being a rub, it also has a place as an ingredient. It gave me the chance to do a couple of overdue photos as well.

What struck me about about Rod's Rub was the haunting, smokey notes of mesquite combined with just the right touch of honey sweetness. After the experimentation with grilling using this rub, there was something about the flavours that struck me - if it could taste so good rubbed on the outside, how would it work on the inside?

We all know that grilling alters the flavours of spices, but if the rub was used as a key ingredient, the pure flavour of spice could come through; it was then I thought about using it in slavinks. You can pretty much use any of your favourite sausage mince as the base, but my little jar of rub was whispering chicken mince to me. Because the result was so good, I thought to share it with you.

In a frying pan, add the onion, garlic and olive oil and sweat until the onion is soft and translucent, leave to cool. Place the chicken mince in a bowl and add the cooled onion and garlic, Rod's Rub, Sweet Mesquite, breadcrumbs and season with salt and pepper. To help the chicken mince stay together and not crumble, work the mixture with your hands for about five minutes, this develops the collagen which sticks it together. Divide the chicken mince into six portions, then lay 2 pieces of bacon crosswise, put a patty of chicken mince in the middle and lay the bacon over to enclose the filling. Repeat with the rest of the ingredients. Grill or fry on a low heat, until the bacon is nicely browned and the chicken cooked through.

*If you don't have Rod's Rub, well what's stopping you? Okay, maybe a snowstorm. You could substitute smoked paprika instead or a few drops of liquid smoke and regular paprika, or even your own favourite rub. 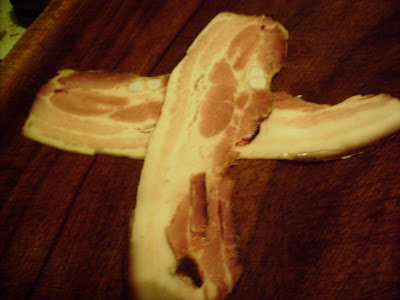 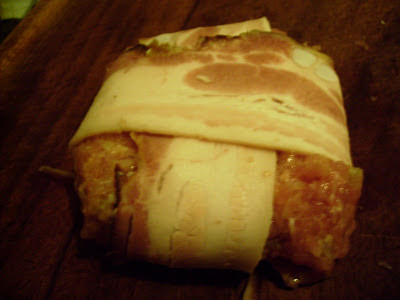 Finished slavink with the bacon ends tucked under 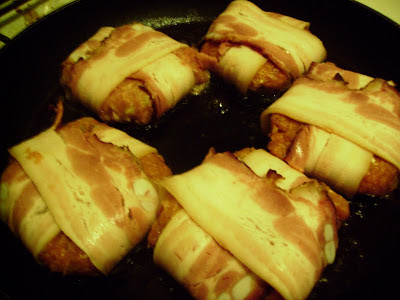 The picture that could get me excommunicated as a writer from Get Your Grill On, slavinks in the frying pan. 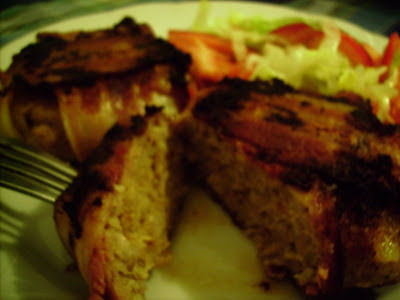 On the plate and very tasty they were.

Holy Moly wrapped in bacon. Of course it's good! Looks most excellent and Gorn's always saying "all I really want are burgers and hot dogs"
I like the paprika (I have hot smoky) and the liquid smoke as I have not your rub.
Might have to be soup tonight as it's suddenly cold and rainy.

You aren't excommunicated. Just one Our Father and Three Hail Mary's each Saturday night.

Hi kalyn, they actually looked delicious too; I'm not having a love affair with my camera, oh, how I loved film!

Hi tanna, I suppose that's just an elemental man thing, though in his case I don't understand with delicious corn bread and spicy tagines. Wonder what Yoda would have to say about that?

Hi robert, that would be with a beer...right?

Now cooking minus the Rub. Just turned them and I am truly amazed that they are not falling apart.
Ann.

Hi ann, working the mixture with your hands helps everything to stick together. No problem about leaving the rub out, they'll still be tasty, but don't forget that fresh or dried herbs could add some more flavour too.