Technical Difficulties
I apologize to everyone who is wondering where I am. The problem that plagued me before Christmas has resurfaced and I'm waiting for another technician to come diagnose my problem, i am not able to respond to any ones email or create any new posts until my connectivity is restored. Thanks for your patience.

Australia Day is fast coming up, it's on this Saturday, the 26th in fact. Sam Kekovich, an ex Australian rules footballer, has been driving us mad with his spruiking of lamb, that quintessential Australian meat.

Some time ago I wrote a post asking what is Australian cuisine. Well I still don't know, but I'm going to cook an Australian dish this Saturday, one I've been thinking about for a while now. It occurred to me that a few of you might have some ideas about Aussie food and how it's developing as a style, with dishes, that to you, speak of Australia.

If you would like to join me, you would be very welcome. Just do a post that features an Australian dish, pop the name, An Australian Day somewhere in the post, link back here, and I will do a round up in about a weeks time. Hopefully you can do something on Australia Day, but don't fuss if you can't, we are extremely laconic around here. The dish doesn't have to feature a distinctly Australian food, but you must be able to show a context of sorts, again, we are very accepting of what that would constitute. Nor do you need to be Australian to enter, just show us what your idea of Australian food is, a well cooked shrimp on the barbie, Hogan style, for instance.

The dish I'm doing is absolutely Australian, but in my research, noted that some sneaky Americans have tried to claim it as their own, but on the 26th, it's coming home.

Careful What You Ask For 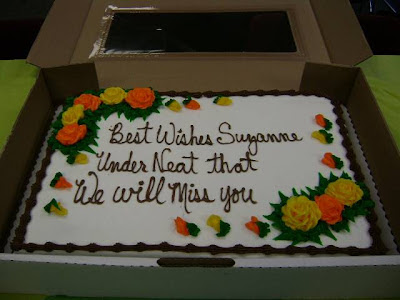 Do you think the customer said something like, 'Best Wishes Suzanne'....underneath that....'We will miss you'

Rice-o-holic
Pinched this quote from my blogging friend Laurie.

"I like rice. Rice is great when you're hungry and you want 2,000 of something." Mitch Hedberg

I know exactly what he means, one's too many, a thousand is not enough.

Gravlax
I've learnt a couple of things this summer, number one being, that when you have lily white legs, sitting under shade cloth is no guarantee that you won't be sunburnt, shade cloth is sun resistant, not sun proof. The other thing I discovered, which was rather a pleasant surprise, when we pulled up our carpet in order to polish the floorboards, there, underneath, were wonderful Tasmanian oak hardwood floorboards, to which we applied a clear coat and they now look absolutely magnificent.

My wife D also knows a bit more about the internet too. Through Michael Blamey's gorgeous photo blog of St Kilda, she discovered in this post, a list of many of the world's city photo blogs, which included one of her home town in Wroclaw, Poland. She also discovered how detailed some of my blog entries are, claiming to have no memory of certain events, happily for me, she did have a laugh.

There were no particular food highlights, though Christmas morning deserves a special mention. One of my wine mates opens up several bottles of French bubbly and I contribute a bottle, as well as some gravlax, cured at home, which becomes part of a Champagne breakfast. This year, due to an increase in numbers attending, as well as being required to bring some to my sister-in-law's, for her Christmas Eve dinner, an all seafood affair, a 2.5kg salmon was filleted and cured, which meant no last minute queueing at Prahran Market, which was just as well; people were three deep at Claringbolds - at 6.00am - not to mention at 6.30am, the line from Vasiliki's, the crayfish supplier, was out the front door in Barkly Street, St Kilda, and all the way, some thirty or forty metres, to Carlisle Street!

It's funny how we rate certain dishes. Everyone raved about the gravlax, but my mate's son, who is a chef, garnered no compliments for his beautifully scrambled eggs. Making gravlax is a snap, but getting scrambled eggs just right requires a bit of technique and attention to detail. I told him how good the eggs were and a look passed between us, we both knew whose dish took the most skill.

But, if you wish to fish for compliments, here is how to make gravlax, the funny thing is, more than half your guests will think you have sprung for smoked salmon. Do you need any other excuse to open up a bottle of Champagne?

Have your fish monger scale, fillet and remove all bones from the fish. Lay one fillet, skin side down into a glass or ceramic or plastic container into which it will fit comfortably. Mix the salt, sugar, dill and black pepper and lay this mixture on top of the fillet and lay the other fillet on top, flesh side down. Put a piece of plastic wrap over the fish and place a board on top with some sort of weight on it. I've used tins as well as water bottles full of water.

Place the container in the fridge and every twelve hours, turn the fillets over and spoon the brine which has formed over the flesh side of the fish, replace the plastic and the weighted board and put back in the fridge. After 48 hours, the fish should be ready. Drain the brine and scrape the dill and pepper mixture off. Lay a fillet down on a cutting board, trim the belly flap off and with your sharpest and most flexible knife blade, starting a few centimetres or inches from the tail, slice pieces as thinly as possible towards the tail. Don't worry about the first few slices, they are never neat, but you will get the hang of it as you go along. Serve with horseradish and mustard sauce to rave reviews.

Mix everything together except the cream. Whip the cream to soft peaks and gently fold in all the other ingredients, chill.

*You can use smaller fillets, just make sure you get identical sides of the same fish, preferably from the head end. Adjust the other ingredients accordingly.
**It depends how hot your horseradish is, in my version I used 3 teaspoons

Here I am back at the keyboard once more, but before launching into proper posting, just a little housekeeping, regarding the Menu For Hope winners of prizes submitted by At My Table, on behalf of my very generous sponsors.


AP12
AU$100 gift voucher from the Prince Wine Store in Victoria, Australia from At My Table
Adam R Gibson

AP13
Degustation dinner for two with matching wines at Interlude, Melbourne (valued at $AU400) from At My Table
Nicola B Parsons

Would these two winners mind contacting me via my email link, which is on the right hand side, listed under contact and I will get your prizes to you as soon as possible. Thanks to everyone who supported the raffle which just seems to go from strength to strength, this year in a remarkable effort we raised $91,188.00, a 50% increase on the year before, which has been earmarked for the school lunch program in Lesotho, Africa.

That makes me feel good, hope it makes you feel that way too.