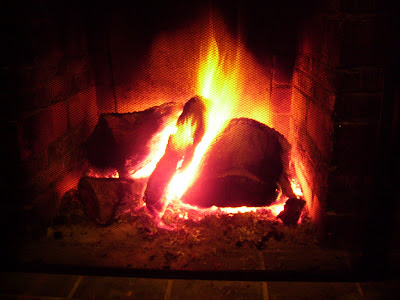 A promise is a promise, there were to be no more truffle recipes and really, when I wrote that, there weren't. However, last Sunday morning, brooding clouds were dropping rain showers, spawned from a freezing cold and icy finger of weather that had fallen upon us straight from Antarctica, so I lit a warming fire. It was also one of those rare & delicious occasions when everyone else was sleeping and I had the place all to myself.

My sleeping wife D had expressed a desire to have one last lot of truffled scrambled eggs, from the small piece of truffle that was held back. As I enjoyed a mug of coffee and the warmth of the fire, my thoughts turned towards cooking breakfast. It was then that a new idea emerged from the quiet recesses of my mind. 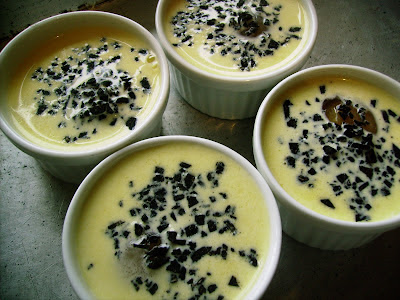 It's a simple dish that I've cooked before, an egg is placed in a ramekin with some cream and other flavourings, then baked until the white is set and the yolk still runny. There might be some cooked spinach, a little chopped ham, or even gently fried fresh porcini, there are many different choices which all make for a wickedly good breakfast. So adding finely chopped truffle was no revelation, more just a natural progression. 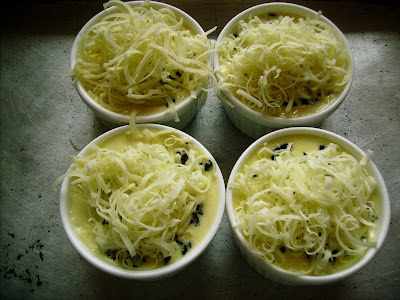 For a little more flavour, some good quality cheese was finely grated and placed on top, in this case it was gruyere, not the cheap square block that smells like vomit, but a fine piece cut from a wheel, other choices like cheddar for example, would be good too. 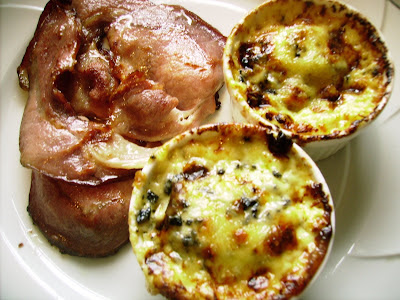 Some raw Continental bacon with its distinctive U-shape is gently fried and provides a smoky and salty counterpoint to the pot of utter deliciousness along with some good quality bread for dunking in and mopping up all traces of goodness.

I hope you all forgive me for breaking my promise -- I've now learned my lesson; to not make promises I might not keep. I blame the fire though.

per ramekin or pot

In a small ramekin or other oven proof container, that will just contain the egg and cream, place the tablespoon of warm cream, then crack in an egg. Sprinkle over the truffle, then top with the gruyere or other cheese. Place in a hot oven, then immediately turn to low and bake for about 10 minutes* until the white is set and the yolk still runny. Two eggs per serve is about right.

*My eggs were cooked a little longer and consequently the yolk wasn't as runny as hoped and is why the cheese became well browned. I was only looking to colour the cheese slightly, perhaps a moderate oven for 10 minutes might be better.

You're forgiven - keep them coming.
Went to SJ's on way home on Saturday because I couldn't stand it any more. Had Waygu carpaccio with truffles and parmesan on Friday night at the Brasserie - so that just worsened the yearning. Had chocolates with truffle on Sat pm, scrambled eggs for brekkie, made truffled tagliatelle, mushroom soup with truffles and then sauce Perigord and pigs' trotters stuffed with chicken & truffle - I feel better now.
Those oeufs en cocotte are delicate devils. I cook them in a water bath to slow the cooking and need to get them out while the white is still a little runny to get perfect yolks.
Nice work again.

Is there no end to this truffle decadence? Hope not.

Neil I have shown remarkable self control with your celbrazione de tartuffi until this recipe appeared with the picture of the glowing fire & the snug ramekins.

Send me truffles now, or I will hunt you down!

You do know that there can NOT be too many truffle recipes/postings/dinners/whatever..
Don't you?
Our new (very old) house is going to be much, much closer to truffle land... I shall make YOU jealous next winter. Thanks for all the recipes!

Hi thermomixer, you make me look positively pedestrian! Boning a trotter is the ultimate testament to how you value your truffles, good work. So you like to mollycoddle your eggs? Sorry, that just slipped out.

Hi ed, I'll talk to the bank manager, hopefully not!

Hi gobbler, nope, not sending any, of course you're welcome for dinner anytime...

If you must hunt me down, you might find me at Simon Johnson, where I'm sure you'll forget the reason you wanted me.

Hi katiez, I wasn't really sure, but it might be possible, someone wants to hunt me down! I'm so ready to be jealous, truffle away, mmm, that's only six months away.

Neil, you are my hero at present. August AGT has Nettles & Truffles in the In Season section and on p90baked eggs. Might have to cancel my subscription and just read your blog!

Is there any chance you would like to move in with me and make this for breakfast? There is no such thing as too many truffles, and this recipe would be just perfect for entertaining at brunch or a summer lunch.

Can you believe it, I've never had truffles before, but it sure looks yummee.

did you bake them in your wood fired oven? do you have a separate oven compartment? we opted to not get one and now i regret it!!!

i am beyond jealous now of the truffles. i think i am going to have to get some and just not tell hubbie how much they were and hope he doesnt ask.

Bacon, baked egg with truffle and a cozy fire ~ you sure know how to live, Neil.

I had a can of V8 juice for breakfast, it's 89 degrees in the shade and the air conditioning is out. Wanna trade? :)

Hi lydia, my daughter wanted me to marry the other Lidia after watching her cook one day, I'll have to check with her!

Hi nina, they sure are great. I hope you get the chance to try some one day.

Go on, sneak some past him, I've done it and am still alive.

Hi vida, thanks, how about a truffled cupcake?!!!

Hi gigi, no trade just yet, though I don't mind the V8, with a little shot of something of course!

first I have to research truffle, BDW, I am from Asia and I am trying my best to learn cooking (decent meals :-)), thanks for sharing your ideas... Busby SEO challenge

I am so incredibly jealous now, on so many levels, it's just not funny. When my husband gets up whiel I'm still sleeping, it's to fling himself onto the sofa in front of the TV to watch sport!! And truffles are very rare visitors to our kitchen :( Your eggs look positively fabulous!