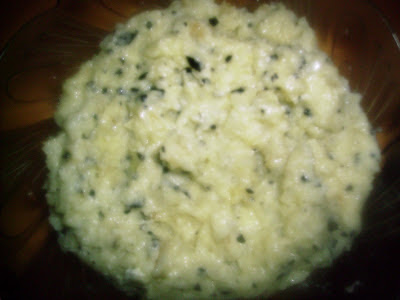 I have been mucking about with a few new recipes for truffles this year and this will be the last, promise.

You'd think that television presenting was a pretty safe job, but after watching Maeve O'Meara from Food Safari getting a little close to the crepes Suzette pan at the moment of flambe and being saved from losing her eyebrows and magnificent head of hair by the lottery of a fortunate wind direction and a well timed back lean, one might think twice.

The only balm available, if the unthinkable happened, was the crepes Suzette sauce mixture of butter, sugar, orange juice, Grand Marnier & cognac -- O'Meara might have looked poorly but would have tasted wonderful.

I'm sure in such a case, the Frenchman demonstrating, Laurent Branover, would have leapt to her immediate assistance!

It was on the same program that Philippe Mouchel cooked his truffled celeriac puree, which piqued my interest. There is no doubt that truffles are queens of the kitchen, producing right royal dishes, but they also have the wonderful ability to lift fairly mundane vegetables to new, undreamt of, heights.

What's good about this dish is that because of the amount of butter, which carries the flavour, a little truffle goes a long way, making this one of the more economical truffle dishes, if there is such a thing. Some may think of celeriac as a strong tasting vegetable, but the butter and truffle completely tames it and it's a breeze to make. The other great thing is, because it's so rich, a little goes a long way, stretching your precious truffle just that little bit further.

Put the celeriac in a pan with enough milk and water to cover and bring to the boil, then simmer until soft when tested. Drain the celeriac, put back in the pan and put back on low heat until it has dried out. Mash and blend in the butter a piece at a time until fully incorporated, then season to taste. Grate in some truffle and serve.

*Philippe believes the milk helps the celeriac to retain its pale colour.

If you would like to attend the Truffle Gala Dinner at the brasserie by Philippe Mouchel, you are welcome to join my table, there are four of us so far.

Loved that episode...especially the copious amounts of butter used.

Thanks for the invite but will be in Sydney. Hope to go to the Brasserie soon though - might get some truffled celeriac.
Hope you froze some of the truffle & morel sauce as the diminuitive Italian suggested?

Just bought some fresh black truffle at Simon Johnson (don't tell my I overpaid just tell me where to go)so very tempted to try the truffle celeriac. Sounds so easy too.

Neil, you ordered a lot of truffles!!! But I am sure it's all worth it. Truffles and butter - I think they really let each other shine. Wonderful stuff!

Hi lucy, it's the French who say butter is the secret of life, who am I to argue?!!!

Hi thermomixer, sorry you won't be there, should be a wonderful night. All frozen and ready for some more homemade pasta.

Hi elliot, that's where I went too. The ones from Tassie are way more expensive.

Hi anh, it depends on your point of view, in total, I bought 150g, which to some chefs, isn't much at all, I have a recipe that calls for 100g for the one dish and other recipes that call for cooking and serving whole truffles! I used mine over two weeks and stretched them out. They went a long way and I haven't posted everything I did with them. What price the magic?

Absolutely fascinated by this rcipe - I've been on a celeriac kick for a while now, but mainly remoulade. This sounds like luxury nursery food!