The Eureka Stockade
On Sunday, 3rd December, 1854, just before dawn, troops of the 12th & 40th regiments as well as police, numbering some 276 personnel in total under the command of Captain J.W. Thomas, moved quietly towards the 150 odd sleeping miners camped inside a hastily constructed stockade on the Eureka diggings. With the troops and police 150m away and advancing up a slope, a single shot rang out. 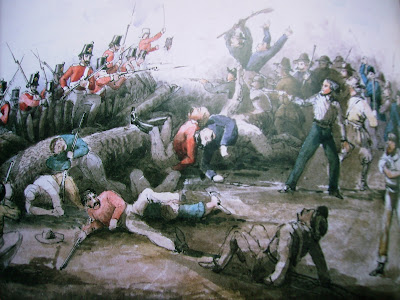 
Thus began a short, fierce battle that was to help shape democracy in Australia, ironically not fought by Australians, but mostly foreigners drawn to the young colony by gold fever and the immense wealth of the Ballarat and Bendigo diggings.

The first public discovery of gold in Victoria was at Clunes in the Pyrenees Ranges of central Victoria by James Esmond in 1851, who later played a part in the Eureka Stockade and was eager to claim the government reward of 200 guineas (1000 pounds), a very substantial amount in those days, posted in an effort to stem the rush of Victorians to the New South Wales fields that had opened up just a few months before.

When a small fleet of ships arrived in England later that year, carrying more than eight tonnes of gold from the Victorian diggings, a world-wide rush commenced, as did problems for the Victorian government, who in an effort to stop the exodus of people leaving their jobs in young Melbourne town for the diggings, decided to issue licenses for the right to dig for gold.

Lieutenant Governor Charles Joseph La Trobe's gold license was set at 1 pound ten shillings per month and was designed to keep people from leaving their employment. At first it seemed a small price to pay, but as the easy pickings dried up along with the miner's ability to pay, the gold license became hated, not helped by the police's offhand and sometimes brutal treatment of miners during license hunts.

Most miners thought the license unfair, but the government was in a bind, the young colony was desperately short of cash, indeed, La Trobe, fearful of a revolution, backed down to the miners time and again, and was replaced by Sir Charles Hotham, who inherited a treasury deficit of almost 1,000,000 pounds, a huge sum of money and gold was looked to as the answer.

Even though most authorities agreed the license system was a gross injustice which many miners tried to evade, Hotham ordered increased license hunts and into this inflamed situation staggered two drunken Scotsmen, James Scobie and Peter Martin who were celebrating their reunion on the diggings.

It was late at night on 7th October 1854, when Scobie tried to get another drink at the now closed Eureka Hotel. James Bentley, the owner, refused and after shattering a glass panel and saying some uncomplimentary things about Mrs Bentley, the pair lurched off, unknowingly followed by Bentley and three others. In the dark Scobie was hit over the head with a shovel and he and Martin were kicked and punched to the ground. Martin managed to scramble away while Scobie was beaten to death.

Bentley was arrested, but the inquest into his death returned an open finding, with the coroner accused of misdirecting the jury. Peter Lalor, who was prominent in the movement against gold licenses, wrote to Commissioner Rede with evidence from jury members, who then had Bentley arrested on a charge of murder.

He was tried before Police Magistrate John D'Ewes whom many suspected was in cahoots with Bentley, and was subsequently acquitted. This simply infuriated the miners, many of whom had suffered at the hands of the police and on the 17th Ocober a meeting was held outside the Eureka Hotel, attended by some 5000 diggers and as tempers flared, the hotel was burned to the ground, after the reading of the Riot Act.

Meanwhile, another incident on the 10th October had added further fuel to the already heated situation. Johann Gregorious, a servant of the Catholic priest, Father Patrick Smyth, was arrested for not having a gold license when visiting fellow Armenians on the field. He argued that he didn't need one in the course of his work, but everyone on the diggings, whether searching for gold or not, was required to have one.

The trooper then struck him and knocked him to the ground; Gregorious, a cripple, was later charged with attacking the trooper. This was seen as an intentional insult to Father Smyth, the Catholic church and all the Irishmen on the diggings, of whom there were many.

The Ballarat Reform League was formed on the 11th November, at a meeting of some 10,000 miners at Bakery Hill, under the chairmanship of John Humffray, a Chartist, and it was decided to press Hotham for the release in Melbourne of Fletcher, McIntyre and Westerby, who had been arrested for the fire at the Eureka Hotel as well as petition for manhood suffrage or the right to vote, but this was all denied by Hotham.

On Humffray's return with two other delegates, Black and Kennedy, they were greeted by 12,000 miners at Bakery Hill, where gold licenses were burnt and Peter Lalor addressed the miners publicly for the first time.

The next day, 30th November, Rede ordered another license hunt and the miners were so incensed that fights broke out with shots fired by both sides. What followed was another meeting on Bakery Hill, where Lalor took charge of the heated and angry meeting in the absence of other delegates who had gone to Creswick to seek support.

It was at this meeting that the flag of the Southern Cross was first unfurled and the men knelt in a large circle to swear allegiance...

'We swear by the Southern Cross to stand truly by each other, and defend our rights and liberties.' 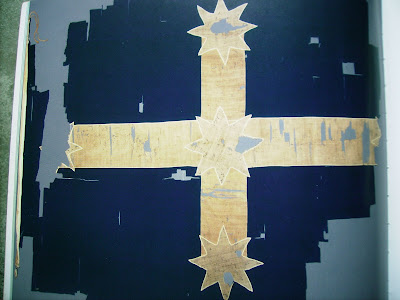 The original flag, on display at the Ballarat Fine Art Gallery, situated on the very spot where the government camp and the police were stationed 150 years ago.

They then marched behind Canadian Captain Charles Ross and his flag to the Eureka diggings where they constructed a crude stockade of logs and upturned carts. The miners were calling for an end to licenses - no taxes without representation or manhood suffrage and short parliaments amongst other things: This was treason to the government.

So after a bloody half hour on that fateful Sunday morning when the miners weren't expecting an attack, fourteen rebels lay dead along with one trooper. Of the dead rebels, only one was an Australian, the majority, Irish. More on both sides were to die in the coming days.

This was no grand uprising along the lines of the French Revolution, English Civil War or the American War of Independence, but fought by foreigners brought together by government injustice, corruption and plain pig-headedness. None of the thirteen tried for high treason after the battle was ever convicted and as a direct result of the events that lead to the Eureka Stockade there were genuine reforms to Parliament, with both Lalor and Humffray being elected to the Victorian Legislative Assembly.

My own family history has it that one of our ancestors was present at the stockade and was responsible for getting the badly wounded Lalor out in a wagon, covered with straw, taking him to Father Smyth's, where his arm, shattered at the shoulder by a musket ball, was amputated the next day by Dr Doyle.

Over the next week or so, I will publish a couple of recipes in honour of those at the Eureka Stockade.

I had no idea that this was the history of Australian Parliamentary reform. To think you had an ancestor there! I look forward the recipes; all of I can think of as American goldminer's staples of the time are hardtack and beef jerky...mmmm...

I'm ashamed to admit, even though I had a connection, it was only this year that I looked into it after visiting Sovereign Hill where they had a wonderful light and sound show. Don't worry, my gold miners are going to be better fed!

. . . and sourdough, the American miners had sourdough don't forget.

I had to save this till the laundry had gotten done and we at least had milk in the house to give it proper reading time.

I loved reading this. Growing up I don't think I paid much attention to history and now I find it enthralling! Excellent reading this.

How many battles have been lost to pig-headedness do you suppose.

Such a challenge you've thrown down for yourself now Neil - recipes!!