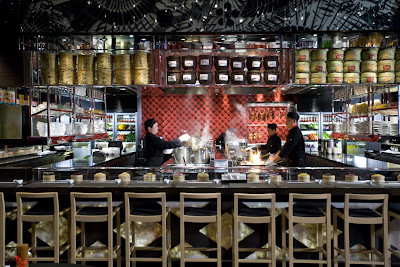 Walking past Crown's big name restaurants sends a shiver up the spine, the same feeling football lovers have when turning up to the MCG, but instead of seeing Judd, Ablett or Franklin, it's Perry, Brahimi and Mouchel, the superstars of Australian cooking.

So it was a little disconcerting being unable to locate Crown's newest addition (opened September, 2008) anywhere amongst the greats, until a little advice pointed to the main gaming floor of the casino itself and there amongst the flashing lights and noisy throng was the smartly designed space (Bates Smart) with low hanging mesh chandeliers, a silk appliqued wall and custom designed furniture. As you would expect, Feng Shui principles are at work, with tea mountains meant to greet diners and bring good luck. 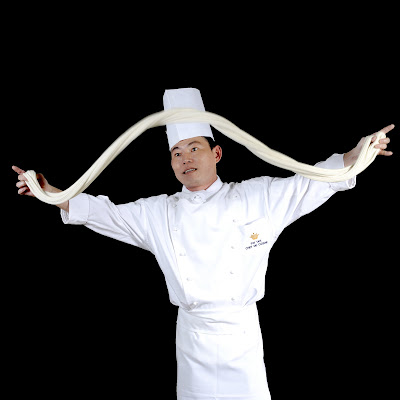 A Master Chef, Pin Tan, not only cooks authentic Asian cuisine but also makes the restaurant noodles by hand. Fitting in with the interactive feel of the place, there are noodle making demonstrations and a tea master, a sort of wandering minstrel who prowls the restaurant, giving tea ceremonies with water overflowing everywhere and a funky tea kung fu show with the deadliest tea pot you'll ever see, don't sit too close!

There are a choice of 24 different teas, including Pu'Er, which is aged a minimum of 5 years and Sho offers 4 different Pu'Er teas aged for up to 35 years.

We sat at the open kitchen and the energy from the chefs equalled that coming from the gaming floor, giving a busy, bustling street hawker feel. Three delightful dumplings were presented in their steamer. With light clean flavours, they were the best I've had in a very long while. Next were slices of roast - char siu pork, duck and soya chicken, each cooked to juicy succulence, hardly needing the hoisin and plum sauce offered.

One dish that needed a little more loving attention was the wok fried crayfish; chunks of pearly white meat had been just overcooked and coated in a somewhat overly sticky sauce. It's a dish that could really shine if properly done, but the next dish caused all that to be forgotten. A baby barramundi had been given an ethereally light coating and deep fried whole then splayed out on a plate in the Asian manner, dribbled with a chilli oyster sauce and coriander leaves. 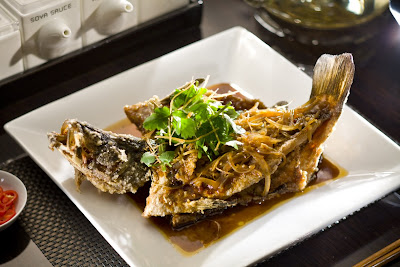 It was a triumph of deep frying, beautifully moist flesh with its counterpoint in the crisp crunch of the skin, all sweetly married together by the sauce.

That Tan can also handle spices was evident in his version of beef rendang. Slow braising had brought the meat to absolute tenderness and surrounded it with wonderful curry flavours, carried along with coconut cream. The heat level was towards the high side, not uncomfortably so and offset by rich flavours.

The heat level was kept ramped up with the next dish of chicken and dried chillies, tender nuggets of chicken with dried chillies innocently nestling against them. Hot to the bite, but easily avoided, they still gave up some their heat and earthy taste.

Classic char kway teow made an appearance, the wok hei (wok breath) working its magic on the slippery rice noodles, prawns and Chinese sausage, though there was a slight touch of oiliness to it.

A soothing dessert of mango served three ways, belied the notion that Asian desserts aren't worth the trouble. The ice cream lost none of its fruity intensity, the jellied mango was perfectly executed with just the right gentle wobble and showcased against sweet little cubes of fresh mango.

It's probably stating the obvious to say that Sho is probably aimed at the gamblers on the surrounding tables and slot machines nearby, but what has been created is a restaurant of some substance ($6,000,000 fitout), style and quality, a little haven amongst all the hustle and bustle, with its soothing teas, light snacks or substantial meals. There are definite showy elements as well, so, even if you didn't feel like taking a punt, it's no gamble that this is a worthy destination for a meal.

Sigh
I want to watch him make the noodles!
What a fun photo!!

The fried fish looks appetizing but I'll take your word when you mentioned that it needs attention.haha!
just droppin' by to say HI!
https://www.technocooks.com

Oooh, look at that baby barramundi! You have me drooling now. It sounds like a wonderful plae for a meal!