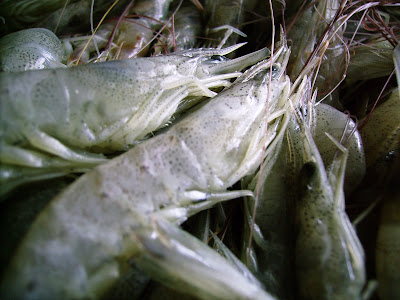 After reading about local fresh shrimp on Haalo's blog Cook (almost) Anything at least once, I kept an eye out for them at Prahran market and eventually came up trumps. These shrimp came from the mighty Clarence River in northern NSW, Australia's largest east coast estuary and found their way to Theo and Sons' stall at the market.

They prove the adage that good things do come in small packages.

While small might seem pesky to some, shrimp have the very sweetest meat and are worth the effort. A hint on quick peeling I picked up from Culinaria Germany, is to hold the head in the fingers of one hand, grab the tail with the other hand and give a sharp twist, which releases the shell from the body and an easy tug releases the meat from the head section.

Not bothering with that, I deep fried them as they were, eating them head, shell and all. My wife D, a veteran at shelling sunflower seeds was happier to peel poached shrimp and devour the sweet flesh with a dab of aioli.

Next time I'm going to have a crack at English style potted shrimp.

They cook in a flash, needing no more than one or two minutes, either poached or fried - be careful with the frying as they tend to splatter hot oil at the start.

At $12kg, Clarence River shrimp are a great bargain and wonderful eating, look out for them. 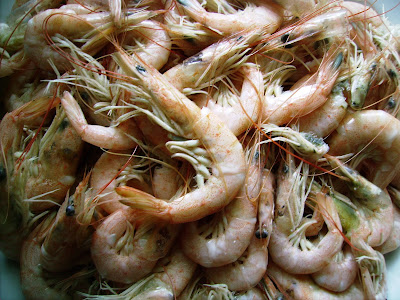 Soured Off
Last year, an article in Epicure stated that a certain brand of sour dough bread contained no yeast, something that more than a few bakeries around town are now claiming for their sour dough breads.

For the record, sour dough breads do contain yeast, without it, they would just be flatbreads.

It's early in the year, but Epicure is at it again. From a recent article on cherries.

'...Some of the favoured sweet varieties are bing, van, rons and supreme, but only occasionally are they labelled by variety in the markets. The best-known sour cherries are morello and maraschino, with a slightly tart edge that is perfect for cooking...'

'Since 1940, "maraschino cherries" have been defined as "cherries which have been dyed red, impregnated with sugar and packed in a sugar sirup flavored with oil of bitter almonds or a similar flavor.'

Neither a fresh cherry nor sour, it's a manufactured item available all year round. Cook with it, hardly. It is mostly used for its decorative looks on cakes and in cocktails.