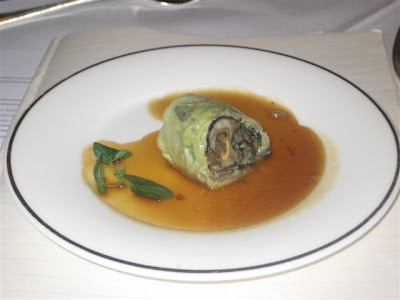 I swear you know the most fascinating people and do the most extraordinary dishes! I've enjoyed many a snail. This is a very different and appealing idea, somehow the cabbage leaf is extra special... maybe that's because most cabbage rolls tend to be everyday dishes. Love to try this.
Always seems fun to see what foods gives people the willies and they won't touch.

Hi Neil
That really was a great dish and the recipe really worked to reproduce the dish J-P Jeunet served us. I should add that it was Sandra, my partner in all things, who first suggested that I show you the recipe.
Elliot

Delicious. With the cabbage leaf, that dish really is gardener's revenge.

Why don't we try for real snails? Some of those tinned ones come from India - not that there's anything wrong with that - but I stamp on more snails in my garden than France eats in a day. Stefano Pieri demonstrated how to to cleanse them for eating in his series some years ago. It was quite simple, just feed them on greens and bread for a week then starve them for a day or two.

Hi tanna, I think that food is a good entry to fascinating people, I know you after all! It seemed such a great idea of Jeunet and appealed instantly, especially as we have cabbage rolls as everyday food too.

Hi elliot, then I owe thanks to sandra too. The dish came together really well, though I wasn't completely sure how the liquorice would work in, but I needn't have worried.

Hi kitchen hand, I've never foraged for them, but wouldn't mind trying. One night at your place? I'll bring a torch, butter and garlic!

On this occasion I needed a lot of snails (double quantity) and getting them ready prepared was a big help.

Thanks for posting this Neil. He had some great dishes on tasting at the brasserie over the week.

Best snail dish I have had is from Carlo Cracco in Milan - snails in olive oil creme brulee, really yummy - picture: http://www.ristorantecracco.it/images/website/maincontent/ricette/large/12_l.jpg

Hi thermomixer, Elliot lent me the book of recipes, so there may be more...


We bumped into your blog and we really liked it - great recipes YUM YUM.
We would like to add it to the Petitchef.com.

We would be delighted if you could add your blog to Petitchef so that our users can, as us,
enjoy your recipes.

Petitchef is a french based Cooking recipes Portal. Several hundred Blogs are already members
and benefit from their exposure on Petitchef.com.

To add your site to the Petitchef family you can use http://en.petitchef.com/?obj=front&action=site_ajout_form or just go to Petitchef.com and click on "Add your site"