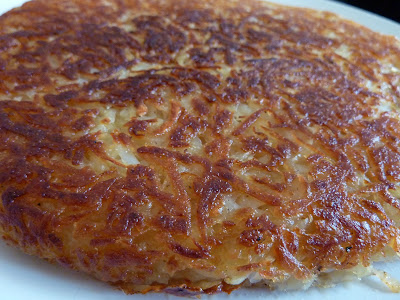 In my younger days, I knocked around with a couple of Swiss blokes. One of them was Francois, the manager of The Swiss Club in Melbourne at that time, and as a result, developed a bit of a taste for things Swiss, particularly the iconic dishes of fondue, raclette and gschnatzeltes, thin strips of veal in a creamy mushroom sauce served with rösti, grated potato simply pan fried like a giant hash brown.

My friend showed me how to make rösti, even how to pronounce it, but I was too knuckle headed or not organised enough to pre-boil the potatoes. In short, I was a failure at being Swiss.

Then one day, I came across a technique for using raw potatoes to make the dish. Hallelujah, I could have my rösti and have it NOW!

You can too. I won't bother you with the arguments over whether raw or cooked potatoes are best, no need to worry too much over which type of potato to use, any good quality ones will do, white or yellow, see what works best for you.

Coarsely grate all the potatoes and place in a clean tea towel. Gather up the corners and twisting and squeezing, get out as much potato juice as possible. Season with salt and fresh ground pepper, remember, potatoes love salt.

In a non stick fry pan or a seasoned cast iron pan, melt 25g butter on low heat. Add the grated potato and evenly smooth the top. Cook on low heat for about 15 minutes, lift an edge and if well browned, place a large plate over the fry pan and tip over, melt 10g butter in the same pan and gently slide the uncooked side back in and cook for another 10 to 15 minutes. Tip onto a plate and cut into wedges to serve.

No cheese?
Nice melting cheese inside would be yummy.
-P (the cheese aholic)

Oo, that photo is so mouth watering.

There's something so very simple and inviting about rosti, don't you think? And the ingredients are pretty much always knocking around my cupboard.

Speaking of which .. you've inspired me to whip up a batch!

Wedges? I want the whole thing. Forget the veal.

Hi honey, it may sound absurd, but possibly there is a thing of too much cheese!

Hi kh, I know where you're coming from, but without the veal, it would be a food fight to the death.

Meant to comment on this before - we like it and there is a recipe for what purports to be Roesti. But it is nothing like the real thing. So have to get the Magimix out to grate the spuds. :(