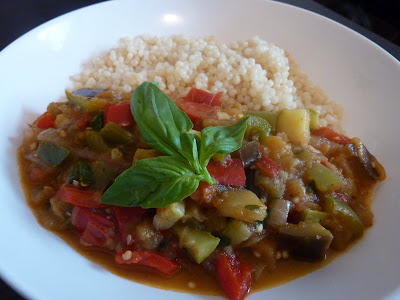 We recently stayed at a wonderful B & B, 68 Main, in Birregurra. Funny name, but at least you won't forget the address.

Hosts, Graeme and Tony, have created a magnificent garden over a couple of acres, with not just pretty to look at plants, but also ones you can eat, which they encourage you to do.

The house has a well equipped gourmet kitchen, inviting anyone who can resist the temptation from the nearby Royal Mail Hotel and the renowned Sunnybrae Restaurant, to cook up a storm.

Cooking wasn't on my mind when venturing out the front door one morning, but then I spied a bag containing a couple of kilos of zucchini, generously left there by the hosts the night before. They were young, firm and begging to be cooked.

It was at that moment the realization hit that ratatouille hadn't been on the menu in a long time and would easily account for at least half of the windfall on the porch.

Ratatouille is a Provencal dish that causes many arguments about the best way to go about it. There is one school of thought which suggests layering the vegetables, similar to Remy's version in the movie Ratatouille, which melted the hardened heart of Anton Ego, the movie's feared food critic.

It looks attractive served this way, but the vegetables seem to maintain their own integrity, not coming together in a seamless whole.

The version I urge you to cook is the one where every component is slowly braised together in the pot, producing a sublime vegetable ragout, which, when served at room temperature or perhaps slightly chilled, screams summer.

If I was a vegetarian trying to convince someone to go meatless, this would be the dish I'd serve. If there's any secret to it, it's in the cutting. Try not to have large chunks of anything, a bit less than 2cm or 1/2 inch square is about right.

Don't worry about the eggplant melting, it adds body to the sauce.

Put the onions and garlic in a large pot with some olive oil and sweat until soft. Add the eggplant and keep sweating until the eggplant softens and changes colour. Add the red and green capsicums, and soften, then add a glass of wine or water, the tomatoes, thyme and basil, season with salt and fresh ground pepper. Bring to a simmer and cook for about ten minutes, then add the diced zucchini and cook until the zucchini is soft but not falling apart. Allow to cool, then serve. Cous cous is a great accompaniment, as is rice.

Love ratatouille, but have cut back significantly on the amount of oil that the veggies swim in as my girth expands.

Thanks for the link to 68 Main.

Did you go to Sunnybrae and the Royal Mail?

Hi thermo, no Sunnybrae this time, but we did do the Mail, good honest country cooking and George is a real character. We'll go back in the autumn, it's the only season we've missed. GB says the mushrooming is pretty good.

This reminds me of the movie =) Nice reading your blog. It nourishes me with nice food, photos and info.

Amazing and delicious I'm sure!