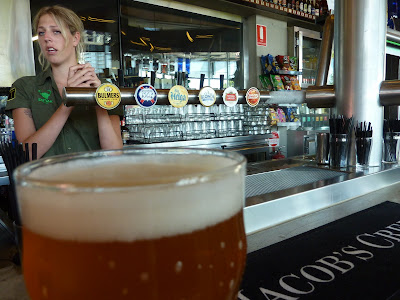 Can you spot Big Helga?

Somethings are just meant to be right. Like the other day when an invitation to try a new offering from Matilda Bay Brewing Company hit the inbox.

Summer proper seems to have hit, so does one need any other reason to drink beer? Just ask Homer Simpson, "mmmm, beer!" So, with a couple of mates, we caught a train to the Transport Hotel to road test a few Big Helgas on a stinking hot day.

One of my friends was in search of, "a beer that tastes like beer", which, loosely translated, means beer that doesn't taste like water.

Matilda Bay have been around for while, bringing us well known beers like Beez Neez, Dog Bolter and Fat Yak. Operating since 1984, they have established a solid track record for fine, innovative beers.

I'll spare you the cheesy blurb introducing Big Helga, other than to say a dry Munich style Oktoberfest lager is what they had in mind. Did they nail it? Not quite. But what we did taste could quite possibly be the next generation in Australian boutique beers.

My friend searching for a flavourful beer loved it, what got my attention was that there was no one component standing out like a sore thumb, everything was in balance.

More than one local producer of beer has fallen in to the trap of singling out a particular flavour, be that of the hops, or in the roasting of the malt and letting it dominate, producing one dimensional brews. 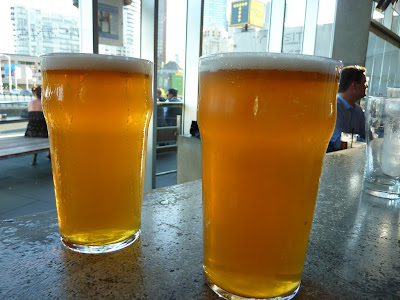 But Big Helga had curves in all the right places.

As you can see, it's a little cloudy, which means the interesting bits haven't been stripped out. Big Helga's a great girl with discreet charms, you should meet her one day.

Oh, and if you like the Transport Hotel, it's up for grabs too, much cheaper to buy a beer there though.

awesome! making me thirsty... im liking my Fat Yak so keen to sample the Big Helga which ironically i havent yet... Gr8 post.

I love Helga! I'm glad you do too.

Give Fosters a miss and send your beer loving mate to Lamsgo Bar or the Royston for a hand pulled independent locally produced ale.

I hate the expression 'boutique beer'. It sounds like a wharfie in a dress shop.

Hi ben, all beers are great!

Hi Scott, enjoyed drinking the fruits of your hard work, thank you.

Why don't they cover their McWilliams cream sherry sign with an updated one?

Thanks for the info, will delve deeper into it!

Hi kh, laughed out loud at that one! But isn't that where they went when John Howard finished with them?

hi N, those Helga's did go down well. The purist Germans would probably scruch up their noses, but I liked them.
Us Aussie's are not so fussy I think.

Hi greg, those purist Germans with their purity laws just for beer, would indeed probably do just that. Thanks for helping with the taste test.

Does one ever really need a reason to drink beer?

I had been drinking some nice local hefs until my bathroom scale started frowning at me again. Now all my beer tastes like water. ;(

I'm crying for you, nothing like the taste of full flavoured beer. I hate that Kate Moss said nothing tastes as good as skinny, that's shite.

It tastes like a real beer, not yellow water. Thanks N for introducing me to Big Helga.