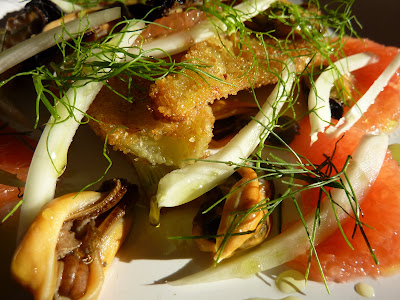 It's funny how some recipes start out.

This one had its first outing at a lunch party last year and pretty much consisted of just raw fennel, mussels and pink grapefruit. Not much to it, but the scent of promise wafted...

Some recipes just need to sit on the back burner till they're ready, this one simmered until today. There was laziness involved, it seemed impossible that at the end of summer there were no zucchini in the fridge, shockingly true for this most prodigious of vegetables and I had no inclination to go shopping.

My plan had been to grill some strips until jail-like bars were scorched into their surface, then build the salad on top. No zucchini, but there was extra fennel.

How about fennel two ways? Cooked and raw. And so it was.

One of my favourite things to do with fennel is to cut fat slices, lighty crumb and fry them; these crunchy slabs then became the base to construct an intriguingly simple salad upon. 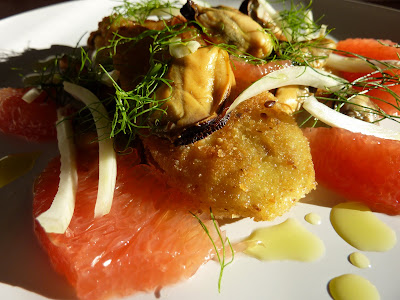 A few flavours from the pantry and this textural dish was good to go. The sweetness of cooked fennel offset with the crunch of raw. Salty mussels dressed with the slight sourness of pink grapefruit, as well as the reduced mussel broth. Fruity olive oil and balsamic vinegar to tie the whole thing together.

Remove the beards from the mussels. Heat a large pot until very hot. Put in the mussels and glass of wine, immediately put on the lid. Cook for a minute, give a shake to the pot, cook one minute more, then check for opened mussels, remove them from the pot and continue to cook until all the mussels are opened. Discard any that don't open. Reduce the mussel liquor until there are 2 or 3 tablespoons left. When the mussels are cool, remove from their shells.

Trim the fennel stalks, reserving the fronds. Remove the first two layers of fennel and discard. Trim the base and cut two of the bulbs into thick slices, season them with salt and pepper, dip them into the beaten egg, then the breadcrumbs, set aside. Heat some olive oil in a frypan and shallow fry the fennel on both sides until nicely browned

On a mandoline or with a very sharp knife, cut the remaining fennel bulb into wafer thin slices, then separate the segments.

Place a couple of fried fennel slices overlapping on a plate, arrange the pink grapefruit slices and mussels attractively around, top with some fennel fronds. Add the balsamic vinegar to the reduced mussel liquor and spoon over the salad. Pour a drizzle of olive oil over everything.

Serve with some crusty bread.

*some folk on certain medication can't tolerate grapefruit, blood oranges would be a good substitute.

I love grapefruit and fennel together. Even though the flavor screams summer, both are readily available here during the winter, too. This might be just the dish to brighten a dreary Rhode Island day.

This is such a lovely recipe. I am still trying to convert myself to like fennel. Together with bitter gourd, it's the veg that sometimes I like, sometimes I hate. Strange.

This sounds delicious! I'm looking forward to trying this with fennel season coming up! :D

Hi lydia, isn't it a great combination, they are just so right for each other. Next time I will add in grilled zucchini and maybe some lentils...

Hi anh, if you haven't tried it, I really recommend crumbing and frying the fennel. It sweetens the taste and moderates the aniseed flavour. Very Italian too.

Hi nigella, isn't fennel so versatile, we couldn't live without it.