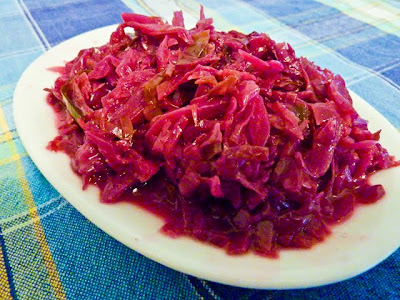 Shucks we just had the last sausage last night ... wonder if the store has another;-)
Gorgeous red!

That looks great Neil. I've bookmarked this recipe and shall try to make it. I love things with a sweet/sour component.

Yum... This is a fave of mine, but I've never thought of adding spices before (but have added a tsp of brown sugar) - will definitely give this a go!

I wish my mother had learned to cook cabbage better so I would appreciate it more. I just read through Maggie Beer's chapter on cabbage and she has similar recipe like yours! Mpw you have tested it, I'm keen to try.

Lorraine @ Not Quite Nigella said...

This looks fantastic Neil and just like my favourite kind of red cabbage! I'm going to try this recipe come Winter when roast duck and goose are on the menu! :)

This looks just beautiful. Red cabbage is one of my favorite things, but beyond a really nice southwestern coleslaw I'm never really sure how to prepare it. I love the sound of the combination of cabbage with apples and cinnamon, and will definitely give it a go for the next round of pork chops!

Hi Neil! Had to pop back to tell you ~ I made this over the weekend to serve with a garlic and fennel pork roast and it was just terrific. I was afraid there might be too many intense flavors on one plate, but the sweetness of the cabbage was precisely was called for. Thanks for another great recipe. :)