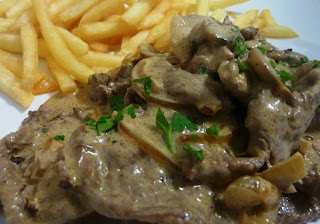 OOh haven't made this for so long! My partner asks for it regularly but I usually say no due to the sour cream as you mention. However I guess I should occasionally say yes given it's so yummy and I do sometimes say yes to a coconut milk curry (which is probably even higher in fat). This looks like a nice versioin.

I love stroganoff in all it's forms.... but I thicken it with Greek yogurt (can't get sour cream)