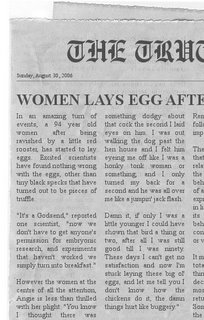 In an amazing turn of events, a 94 year old women after being ravished by a little red rooster, has started laying eggs. Excited scientists have found nothing wrong with the eggs, other than tiny black specks that have turned out to be pieces of truffle.

"It's a Godsend," reported one scientist, "now we don't have to get anyone's permission for embryonic research, and experiments that haven't worked we simply turn into breakfast."

However the women at the centre of all the attention, Angie, is less than thrilled with her plight. "You know I thought there was something dodgy about that cock the second I laid eyes on him. I was out walking the dog past the hen house and I felt him eyeing me off like I was a honky tonk woman or something, and I only turned my back for a second and he was all over me like a jumpin' jack flash. Damn it, if only I was a little younger I could have shown that bird a thing or two, after all I was still good till I was ninety. These days I can't get no satisfaction and now I'm stuck laying these big ol' eggs, and let me tell you I don't know how the chickens do it, the damn things hurt like buggery."

Scientists are examining the rooster to find out how it managed to crossover the species barrier, but Angie is reported to have said she has no sympathy for the devil. "Don't start me up, for I just hope they shove the biggest probe they've got, right up his clacker and make his eyes swell and pop that little red comb of his, then he would know how I feel," a clearly emotional Angie said. "If I gotta hold of him, I'd off with his head and roast him with sweet potatoes covered in brown sugar. That's the only way me and the chicks are going to get any support out of that lazy, good for nothing, midnight rambler. I'd be a fool to cry if anything were to happen to him."

But in a strange twist, a mysterious Southern gentleman, known only as the Colonel, with a goatee beard, glasses and a white suit has come to Angie's emotional rescue. "When the Colonel found out about me, he let me know that I could really count on him. He saved me from my nineteenth nervous breakdown, I was reaching for mother's little helper every chance I got. I adore him, wild horses couldn't keep us apart and he looks after the eggs so well. When they grow up, he says he will find a place for them in his stores. But he does seem to be a man with a secret. I caught him mixing up something down the back shed, and when I asked him what he was up to, he just smiled and asked if I liked it hot 'n' spicy or finger lickin' good. A big ol' shiver just went straight up my spine, like I was eighty again."

In a breaking development, it seems as though all the local chefs are trying to be the first one to feature these eggs on their menu and there is interest coming from overseas as well. Iron Chef Michiba Rokusabaro has reportedly said that with these eggs no challenger could possibly beat him and that he, not the Colonel, was the right man for Angie, though in a first for the show, it seems you can't always get what you want, for Angie has so far rebuffed all advances.

However a shadowy figure from Melbourne, Australia appears to be the first one to get his hands on some eggs and has posted a recipe for them. It is not known by what devious means he was able to procure them and when asked just slyly says there was some pleasure and pain involved, but refuses to reveal who had the pleasure and who had the pain....but he did admit to a certain fascination with The Rolling Stones.

Arrange the potato slices in circles in two small ramekins or souffle dishes, season and add one or two drops of truffle oil if using and pour on chicken stock just to cover. Cover dishes with foil, pierce foil, and bake in an oven preheated to 180 c (350 f) for 30 minutes or until soft. While the potato is cooking, melt the butter in a pan and sweat the shallots until translucent, then add the mushrooms, garlic and thyme and cook until the mushrooms release their liquid and dry out, season. Take the potato out of the oven and remove the foil. Cover the cooked potato with the mushroom mixture and crack an egg on top, be careful not to break the yolk. Put two tablespoons of double cream on each egg, add another drop of truffle oil and return to the oven until the white is set and the yolk is still runny. Serve to a loved one, be prepared to be loved right back.

Thanks Jeanne from Cook Sister!, that was too much fun.

Note: There are several references to Stones' songs in the story. Can you pick them? Answer later.

Rocken good eggs. What a great write up!

Gosh, there are too many Stones references to list them all! Angie, honky tonk woman, jumpin' jack flash, sympathy for the devil, brown sugar, midnight rambler, nineteenth nervous breakdown, mother's little helper, wild horses, finger lickin' (reference to their Sticky Fingers album), you can't always get what you want, pleasure and pain....How many did I miss?

Funny, fun write up, even though you missed my favorite Stones song.

Hi tanna I had a rockin' good time doin' it!

Hi kitchen queen, you got just over half, so maybe your fave song is there. BTW, Pleasure and Pain was a Divinyls song but Chrissie Amphlett used to hang out with Mick, so I will count that as a hit. The finger lickin' good was a reference to KFC.

Ha ha ha!! Fantastic - I love the mystrious gentleman who's going to give all her eggs "a place in one of his restaurants".

Thanks for joining in & I'll let you know when the roundup appears!

Hi jeanne, glad you liked it. You did real good too, only one song left.

Augh!! my face hurts - too funny. I'm going to have to come back to read the recipe properly. I can't stop laughing.