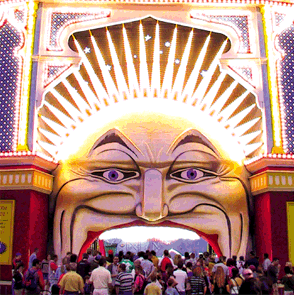 We took our young daughter M to Luna Park on Sunday. It was one of those typical, grey Melbourne winter's day when what the weather would do remains an impenetrable mystery. Also on the agenda was finding a place for swimming lessons for M as well, so we parked near the St Kilda Sea Baths and walked around and up the Upper Esplanade to take in the Sunday market. I've never been a big fan of this market, somehow the objects offered up for sale don't seem that great, more folksy and kitchy, marketed straight at tourists, of which there are plenty in St Kilda. I think the organizers could do themselves and everyone else a favour and catch the ferry across to Tasmania and check out Salamanca market, where you do really want to buy a lot of things on offer.

When we got to Luna Park, the queue for tickets was already quite long, even though the park hadn't been opened all that long. We got our tickets and M told us which rides she wanted to go on. While waiting for the ghost train I asked her what to do when she saw a ghost, and in her way she just shrieked, no answer, just a shriek, at which everyone had a bit of a chuckle. After a couple of hours, feeling a bit hungry, we left the park and walked down to Acland Street. For those of you who haven't been to Melbourne, Acland Street is one of our most famous streets, especially famous for it's Continental cake shops, that are all competing with each other to put on the best display of cakes and pastries in their windows. It is a display that will literally leave you drooling.

A sit down meal wasn't exciting us, fish and chips seemed more compelling and just right for the sort of day it was, so we took a table inside one and ordered. For me, the one true test of a good fish 'n' chippery is the quality of their batter and running a close second is the quality of the oil. The batter has to be light and crispy, not stodgy and with the oil, I'm not too fussed as to its origin, but it must be clean and fresh. This particular shop passed on both accounts.

I have sort of been on a batter mission most of my adult life, always looking for a fish 'n' chip shop that has the lightest, crispest batter that flakes and crunches in my mouth. The type of fish used doesn't really bother me, here in Victoria it is usually shark, gummy or school shark and is called flake in the shops. I don't know why, it just is. Another, I don't know why, is a potato cake, which here is a round slice of potato, battered and fried. If you ordered a potato cake in New South Wales they would look at you strangely, until you realized that you needed to utter the word scallop instead, but in Victoria a scallop is a mollusc.

What sort of batter turns you on? In my quest I have tried all sorts and have finally come down to one. I have made beer batters, yeast batters, folded in whisked egg whites, used various flours, like my local fish 'n' chip shop that told me their formula one day when I oh so innocently asked them what they used in their batter and they told me it was four flours - plain flour, self raising flour, custard flour and rice flour. Then one day I curiously chanced upon what is probably the easiest and simplest. With beer batters, I think the taste of beer is too strong to go with delicate foods, ditto yeast batters. Tempura batters are, well, Japanese, suited to a particular style of frying, the egg white thing, while producing a batter that is light, tends to be quite thick and I prefer batters that cling lightly. A great batter for me is simply flour, water and a raising agent, whether baking powder or sodium bi-carb with cream of tartar. This produces a batter that is not too thick, that swells and crisps on contact with the hot oil, but doesn't retain too much oil.

So here is batter my way, it's not really a recipe, just a method. For each cup of self raising flour, add a pinch of salt and one teaspoon of baking powder. In a large bowl, place the flour, salt and baking powder, then whilst whisking, slowly add enough water to produce a batter the consistency of single cream. That's it. Flour your fish or vegetable or whatever, dip into the batter and fry in the usual way.

MMmmmm.......yum. I love fish and chips. I don't have a good batter recipe of my own yet. I am definately going to give yours a try.

Sounds like a fun family Sunday for you guys!

Cool Neil, that's just what I wanted, a simple batter recipie. Thanks buddy.

Love that picture.
A simple batter would seem to be the perfect thing for simple good fish and chips. I've not ever done them but who knows maybe this will prompt me.

Yum, there is nothing better on a cold winters day out than a great batchof fish & chips & yes definitely potato cakes too!

Hi angela, sorry to hear that good fish 'n' chips is so hard to find where you are, but at least you can now DIY!

Hi pentacular, you know how much I like the KISS principle.

Hi tanna, that really is the entrance to Luna Park and is one of St Kilda's and Melbourne's icons. He is called Mr Moon.