"Gino, I'm sick of doing the dishes. There is no sink, no running water, no dish rack and no cupboard to put them in."

"Darling, I have an idea. How about the next time you bake your wonderful flatbread, why don't you put oil, onions, some garlic and a few herbs on top? That way we can eat and do the dishes at the same time."

Fast forward to Naples, Italy, late 18th century. It was here that what we recognize today as pizza first emerged, with the addition of a tomato sauce topping, after it was discovered that tomatoes were not poisonous after all. Antica Pizzeria Port’Alba, who had been producing pizzas for street peddlers since 1738, opened the first pizza restaurant (pizzeria) in 1830 and pizza's enduring popularity can be gauged by the fact they are open to this day.

The Neapolitans have perfected the style of pizza known as thin crust, with minimal topping which are quickly baked in a fiercely hot wood fired oven. They take their pizza seriously here and have a Associazione Verace Pizza Napoletana (True Neapolitan Pizza Association), to prove it and they accept only two types of pizza, the Marinara and Margherita, as authentic and lay down the rules for pizza makers, no rolling pins for instance, the pizza dough must be stretched by hand. Contrary to popular thinking, Marinara pizza contains no seafood at all, rather, it's a simple topping consisting of olive oil, garlic, oregano, tomato and usually, some fresh basil. 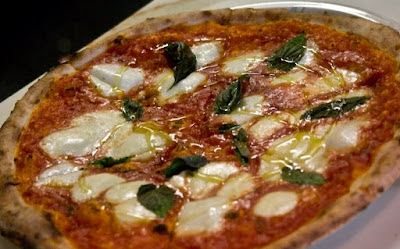 So if you were looking to make an impression in the tough Melbourne market, with a pizza shop on virtually every street corner, where thick crust pizzas with bountiful toppings dominate, wouldn't it make sense to use the Neapolitan model as a point of difference? Well, after the success of Pizza e Birra in Sydney's Surrey Hills, that is exactly what Mauro Marcucci, latterly of Cafe e Cuccina and Termini thought and installed a wood fired oven at the old Termini site on St Kilda's Fitzroy Street. 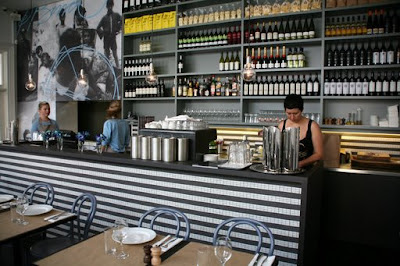 Pizza e Birra literally means pizza and beer, but there is also a small range of antipasti, salads, a couple of rice and pasta dishes and some fish and chicken, but really, the star turn is the pizza. There is a concise, well chosen, wine and beer list, featuring both local and imports as well as a specially brewed house beer, generically named birra; the current brew is very much in the Little Creatures pale ale mould, with floral tones, a hint of sweet malt and restrained bitterness. But the house beer was not the main reason for a visit to this new pizzeria, it was to taste pizza, made the old way. 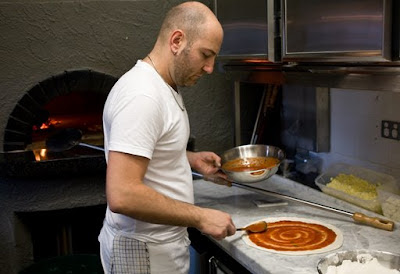 Fundamental to this is the wood fired oven that Mauro explained was just starting to hit its straps - as more pizzas are baked within, the better seasoned the oven becomes. Just as woks have that elusive wok hei or breath of the wok, wood fired pizza ovens contribute their own essence to a pizza, through high temperatures that cooks pizzas to perfection in about two minutes and this is perhaps why they don't require an overflowing cornucopia of goodies atop them, just a couple of well chosen ingredients that gain an extra dimension from the oven, so less becomes more. This is what the Neapolitans are on about and no doubt Pizza e Birra is too. 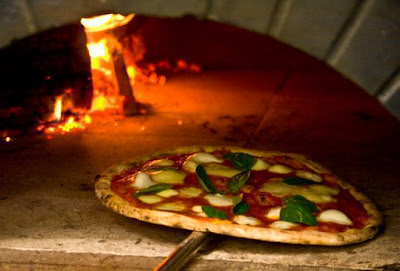 To that end, the '00' flour is imported direct from Italy as well as legendary San Marzano tomatoes, whose intense flavour is thought to derive from the sun drenched volcanic soils of Mt Vesuvius. Even pizza chef Gianni comes from Italy. All this care results in pizzas that have punchy flavours coupled with that essential wood fired essence, which, if you glance underneath, reveals itself in tiny char spots. There are two main styles, tradizionali & bianche (traditional & white - sans tomato) of which the Margherita ($16.50) was superb, but it was just outshone by the Speck ($19.50), an amazing bianche pizza of prosciutto speck, mozzarella & stracchino cheese, all tied deftly together with the haunting scent of truffle oil. 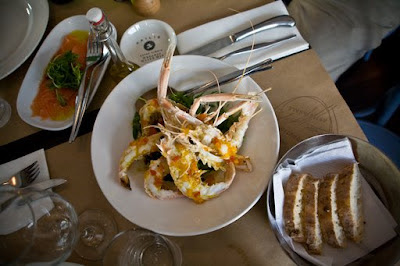 All the attention given to the pizzas doesn't mean that the other offerings are just an afterthought. The Stracchino starter ($10), with soft cheese, grilled radicchio, crostini and truffle oil, is a well thought out dish, combining creamy, bitter, crunchy and aromatic elements that worked well together. The house cured salmon (Salmone, $16.50) with ruby grape fruit, campari & vodka dressing and a tangle of rocket, is a summery crowd pleaser, all light and fresh, having only a mild salt cure. The grilled scampi, which had been substituted for the prawns in the Gamberoni ($17), were less successful, as the tomato and saffron salsa didn't quite mesh. There is a short, interesting selection of salads and vegetables, and the desserts list is also limited, but features a couple of classics with a slight twist, in tiramisu ($11.50) and pannacotta ($10.50). Fragole ($11) was a simple, refreshing dish of strawberries, macerated in Grand Marnier and orange, served with a pebble of vanilla scented mascarpone. 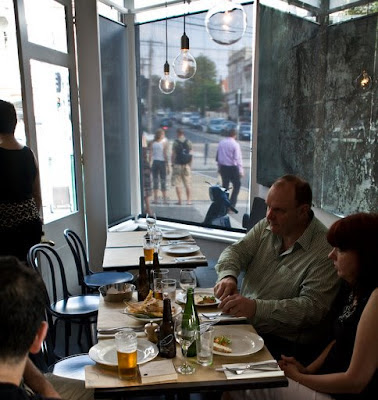 With good sized pizzas mostly a tad under $20 and most beers and the wine by the glass about the $7 -$8 mark, you need only close your eyes, smell the nearby salty sea air, listen to the Italian emanating from the kitchen, to have a quick, cheap, trip to Naples.

All photos Michael Blamey.
At My Table was a guest.

I can see a trend. From memory, Ed reviewed this place too. Then Elliot, then yourself Neil. It must be pretty good if everyone is going. I need to pop down and see for myself.

I now know what the word macerated means after Elliots quiz. :-)

Hi grocer, sorry for your head! I read what you said at Elliot and I agree, good to see genuine people succeed, their pizzas are really tasty.

Hi thanh, I'm wondering if Ed, whose post was up a week or so ago, might have said something to Mauro about the influence of bloggers, as my invitation came after his post. It's definitely worth a visit. I got that macerate question right on the quiz, probably because I've macerated myself from time to time!

Thanks for the info on Pizza e Birra, I had also heard about it a few other places before. I have been trying to find that authentic pizza here in Oz ever since returning from a trip 3 years ago to Naples where we ate pizza at Da Michele, there was a queue 200 metres up the street to get into this place! Ate marinara (apparently named because that was the basic pizza served to sailors, seafood would be Fruite de mare- fruit of the ocean) and it was amazing. So we got to Pizza e birra last night and it was very good! just like Naples. I had a margherita with a Peroni. Bellisimo!!