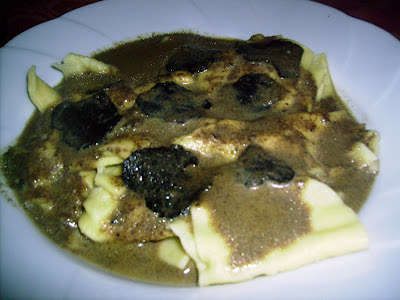 I love Antonio Carluccio, he is exactly the sort of grandfather every child should have, warm, affable and a great story teller. You could just imagine the look of horror on their faces as he recounted the time he ate some casu marzu, that's Sardinian maggot cheese to you and me! Another reason I like him is that he is a master of the quiet hunt, a well known forager for mushrooms of all descriptions, who has been picking since he was seven.

Carluccio has also written a couple of invaluable books on mushrooming complete with recipes. Two of his favourite mushrooms are truffles and morels, members of the important ascomycetes group of funghi, which also includes yeasts as well as the mould Penicillium chrysogenum from which penicillin is derived.

Truffles and morels differ from other mushrooms in that instead of dropping their spore, they are contained in internal sacs called asci and are explosively discharged when ripe. In truffles, these asci are contained in ascoma, the little bumps that give truffles their characteristic warty appearance.

Possibly because they are members of the same family, truffles and morels are interchangeable in some recipes, sauce Perigueux from France being one example. What Carluccio has done is to extravagently combine both mushrooms into a dish which has an astonishing depth of flavour. Served with homemade pasta, it is simply incomparable.

Drain the morels, trim the bases and roughly chop them. Melt the butter in a large pot and sweat the onion and garlic until soft, but not coloured, then add the chopped morels and sweat for 2 minutes more. Add the brandy and ignite, when the flames have died down add the morel soak water and bring to the boil and reduce until the soak water is almost gone, then add the chicken stock and cook at a slow boil until slightly reduced and the flavour concentrated. Take off the heat and add the cream, salt and pepper, then process in a blender until smooth. Pour back into the cleaned out pot and gently reheat. Take off the heat, add the truffle slices and leave to infuse for several minutes. Cook homemade pasta* until done, then mix it in a bowl with some sauce, divide into plates, spoon more sauce over along with a sprinkling of parmesan or pecorino.

*Carluccio recommends handerkerchief pasta, which are simple squares of about 7.5cm (3"), but any shape will work too. He also advises to thinly dice the truffle, but I like the look of thin slices.

I love Carluccio too - have had a bit of a crush on him for years. He's equally charming in Italian and in English, and being fluent in Italian really makes a difference in his shows where he's exploring Italian regional cuisine and speaking to the locals.

I also love the way he'll insist on 'GOOD olive oil' in his recipes :)

Really, it is toooooo much - I'm so jealous. Truffles and morels!

Try pressing thin slices of truffle between 2 sheets of pasta when making your fazzoletti next.

Hi claire, charming really sums him up and your dead right about the way he fits in regional Italy, always appearing so natural and with genuine, not forced, enthusiasm for all food & people. Wouldn't he be great a dinner party?

Hi thermomixer, it's nearly at the end, just one more dish to go. At least for me the morels are free, having a secret spot. Funny you mention pressing the truffle into the pasta, we were just talking about that very thing.

Agreed 100% on the 'Carluccio as Grandad' comment- every child should have one like him!
I am intrigued by the 'truffle' theme recently Neil and you have inspired to do my darndest to give some 'truffle flavoured' cooking a go. As always- keep your brilliant posts coming!

Hi intrepid, he's a top bloke, I'd even settle for him to be an uncle. I never actually intended the theme, it just sorta happened. Thanks for your kind words.