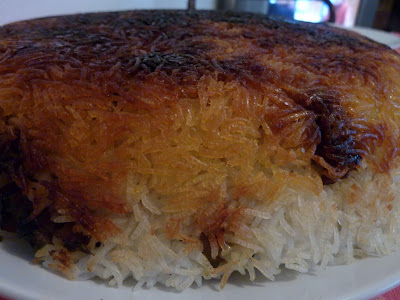 I've always had a low key interest in the food of Iran due to a chance encounter with a tin of Iranian pistachios obtained before the fall of the Shah in 1979. There has been nothing to compare with that memory of cloud-like lightness, crisp crunch and perfectly balanced saltiness. But the Shah was gone and so were those pistachios.

Recently, I met and made friends with an Iranian at work. We naturally talk about food and when his parents came out to Australia, I asked a favour of him. Would they bring some pistachios with them? Well they did and I sat and ate half a kilo at one sitting...I couldn't stop!

His parents have also been kind enough to cook some extra food, which my friend shares with me, absolutely delicious. So it was a nice bit bit of synchronicity, when browsing some cookbooks, that I came across the Persian kitchen, by Neda Afrashi.

Now, I wouldn't buy a cookbook just for the sake of it, there have to be recipes that I want to cook and this book has several as well as being a mine of information on the food of Persia. I suppose many of us think of Lebanese as being typical of Middle Eastern food, but Iranian food has an altogether different slant, with rice being king of the table.

Persian rice has evolved from the basmati variety, but is rarely seen outside the country. The three quality criteria considered are the rice must be as white as possible, have a strong fragrance and be long grained. There a different methods of cooking, but one thing in common they all have is the finished rice must be fluffy, dry and with all grains separate.

One cooking method is called kateh in which the rice is boiled with a fixed quantity of water until it is all absorbed. Another way, called chelo, is to par-boil the rice in plenty of water until al dente, drain, then steam until done with a little butter. Polo uses the chelo method, but with the inclusion of meat, vegetables or pulses added to the final stage.

It was the recipe Albalu Polo (sour cherry rice) that caught me eye, lamb with sour cherries sounded irresistible and even though my rice crust (tahdig - pot bottom) was perhaps a little well done, it was a corker of a dish. 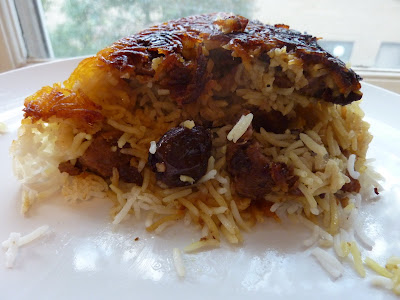 Wash the rice until the water runs clear, then leave to soak in water with 1 tablespoon salt for about 1 hour. Finely chop the onion and fry with some oil until golden. Add the turmeric, cinnamon, lamb and continue to brown for 5 minutes. Add 500ml boiling water, the saffron, thyme, bay leaves and season with salt and pepper. Leave to simmer for 1 hour with the lid slightly ajar to allow the liquid to reduce, you need about 250ml of sauce when done.

15 minutes before the meat is cooked, add the sour cherries and the honey. Meanwhile, bring 2 litres of salted water to the boil, add the rice and cook for about 4 to 7 minutes, until the rice is al dente, or slightly undercooked. Drain the rice and carefully mix with some butter to coat the grains being careful not to damage them.

In a non-stick frypan (essential), melt enough butter to cover the bottom and add 5oml water and a pinch of ground saffron. When this mixture boils, add a layer of rice, then the meat with sour cherries, more rice, more meat and finish with a layer of rice slightly mounded towards the centre. Cover with a lid or tin foil and cook for about 40 minutes on very low heat until a crust has formed. Place a plate over the frypan and flip the frypan over. Serve.

I have heard of this dish but never tasted or made it. Now I'm inspired. I have a fascination with food from that part of the world, too, and there are now several good English-language cookbooks available. Thanks for this recipe.

I have two such books and the rice is fascinating. I haven't gotten up my nerve or maybe haven't found the time yet. I very much like the look of your crust.

Hi lydia, I'm a bit like you, it was all a bit unfamiliar, but after reading the cookbook several times (I do have a life, really), everything seems pretty straightforward. Maybe the cooking times for the rice are a little long for our gas burners though.

Hi honey, I'll make some just for you next time you're over.

Hi tanna, I know what you mean, I think experienced cooks like you will know to adapt slightly. I thought my rice was burnt, but my Iranian friend said it was just fine. It was funny, quite black, but it really didn't taste too burnt at all.

Hi azita, reckon that crust is the best bit! The sour cherries a close second.