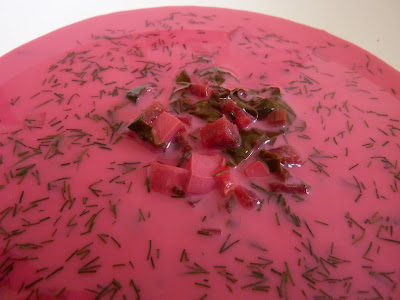 One of the nice things about having overseas visitors, especially those who like to cook, is that a window into another cuisine is opened. It doesn't matter how many cookbooks one has, there is nothing like a native showing you how it's really done.

We've had some super hot weather lately, just perfect for salads and definitely cold soups, which in Poland are called choldniki, the most ubiquitous of which is a beetroot soup (barszcz), though if you ordered chlodnik, you may happen upon other versions without beetroot, which may include equally refreshing sorrel or cucumber, though the soup featured here is undoubtedly of the stain worthy beetroot persuasion.

Not only refreshing, choldnik is also said to be extremely healthy when made with kefir, the kissing cousin of Yakult, the famous probiotic Japanese drink. Kefir is fermented from a combination of yeasts and bacteria and is also considered acceptable for the lactose intolerant.

It originated in central Asia thousands of years ago and spread widely through the middle east. Similar to yoghurt, though with not quite as much body, it has a pleasantly tart flavour and is available in middle eastern, eastern European and some health food shops. Buttermilk makes an acceptable substitute.

This cold soup with its earthy flavours, spiked with a pleasant tartness and herbal zing, makes the perfect pick-me-up on a hot summer's day


Cut the leaves from the beetroots and set aside. Peel the beetroot and place in a pot with the carrots, celery and 1.5 litres water, season with salt and pepper and cook until soft. Five minutes before the end, add the vinegar. When soft, drain the vegetables, reserving the liquid. Discard the celery and carrot. Dice the beetroot into small pieces and put back into the reserved liquid. Cool. Roughly chop the beetroot leaves and cook in small amount of salted water. Cool down and add leaves and the cooking water to the diced beetroot, add kefir or buttermilk, chives, dill and finely diced cucumbers. Season to taste. Place quartered eggs in bowls and pour the cold soup over. Serve.

Nothing could be better than a guest who brings a recipe and show how like this recipe AND everything is locally available! Beautiful color! (ummm well I love red)

Hi tanna, guests who can cook are always welcome at chez neils! Nothing like eating a soup that not only tastes good but is doing good for you.

I agree with MKiHC - great to have guests who love to cook. We had a german exchange student many years ago who brought a whole new menu.

Hi thermo, it's these sorts of exchanges that really open your eyes. Where else can one get hands on instruction like that?