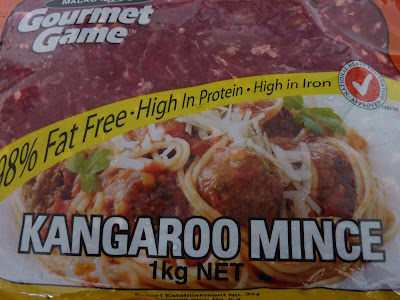 I know we like to run down supermarkets, but for most of us they are the reality of everyday life. But isn't it great when you find something unexpected amongst the shelves?

My shame is that I've known about Coles selling kangaroo mince for a couple of years, but have never got around to cooking some, though that was always the intention, even buying some distinctly Australian spices at a Farmer's market some six months ago to add to the mix. 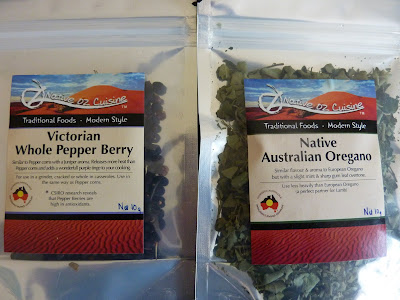 Pepper berries, or mountain pepper berries as they are more commonly known (Tasmannia lanceolata), have a slight juniper-like flavour and that strange schezuan pepper thing of growing hotter in the mouth the more you eat.

The native Australian oregano is difficult to say much about as there isn't much information on the packet, but due to its subtle lemon tang it wouldn't surprise if it turned out to be lemon myrtle (Backhousia citriodora) given a little Aussie spin. 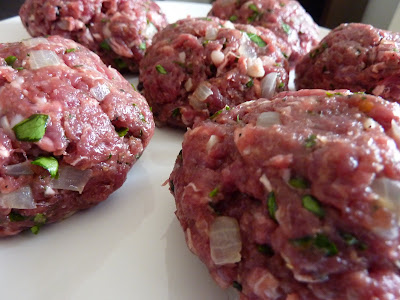 The thing about kangaroo meat in general is that all that hopping about makes for pretty lean meat, this mince was claimed to be 98% fat free, so it pays to think carefully about what flavours to put with it, along with some kind of fat or oil to keep things lubricated.

One could add some fatty minced pork, but to get the whole kangaroo experience, I used olive oil instead. Kangaroo isn't strongly gamey in the way boar or venison is, so a careful hand is needed in regards to spices and seasoning.

Sam Kekovich is banging on a bit about being Australian and throwing some lamb on the barbie this Australia Day, why not go a step further with a bit o' bush tucker? 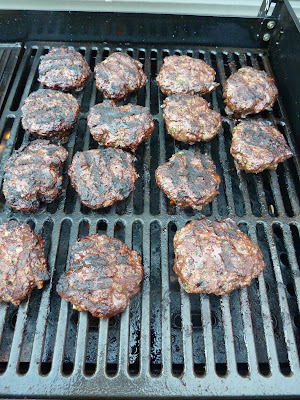 Put the onion and garlic in a pan with some olive oil and sweat until soft. In a large bowl, put in the cooked onion and garlic, kangaroo mince, mountain pepper, Australian oregano, parsley, lemon zest, egg and breadcrumbs then season to taste with salt and fresh ground pepper. Put in enough olive oil to stop things drying out, I used about 100ml. Mix well with your hands and form into hamburger patties. Cook to your liking, being careful not to overcook as they will dry out.

*available from Coles supermarkets in the fresh meat section

I would think this would be one of the ultimate ways to experience Australia!

Apparently it's the best meat you can eat.

I've never tried kangaroo meat, so I'm very curious. And the spices -- wonderful! Wish I could get any of these ingredients here in the Northeast US.

Hi tanna, you're dead right, it is really a unique australian experience, though the spices and herbs aren't all that widely used at the moment.

Hi kh, it was pretty damn good. It's all the friend of a friend eats due to a heart condition. I'd like to try it out in a pasta sauce next.

Hi lydia, it's taken a long time for bush tucker to gain a foothold here, we don't realize some of the great things we've got. It took some hawaiians to make macadamias famous.

Thanks Neil. They look delish - but as you say - roo has lower fat levels, so did they taste dry?

Wow! I tried some kangaroo when I was in Oz. I wish I can taste your kangaroo burger, i assume its sooo delish! btw, is there any koala meat? and is it edible?

Happy Australia Day Neil to you and your family! :)

Hi thermo, I'd have to say they did, even with the extra oil, but not in a bad way. I think a little minced pork belly would be nice though.

Hi joanie, would love to give you a kangaroo burger, so would the koalas!

My mother use to prepare hot dogs with Kangaroo meat those are delicious as the hamburgers.Generic Viagra Buy Viagra

I absolutely adore kangaroo burgers. Australians really need to eat more manga meat, it is ridiculously healthy yet we pay top dollar for a premium cut of domesticated cow? Society is weird.

I actually started my own Kangaroo Burgers homepage to try and spread the word. Kanga burgers are the true Aussie experience, not lamb!