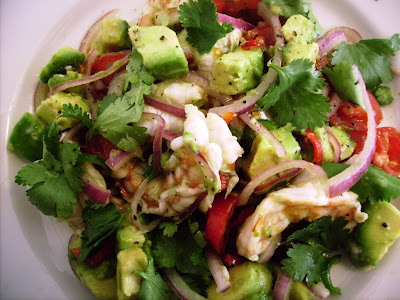 We were at a dinner party hosted by some Mexican friends, when they asked why I liked Mexican cuisine. It was the same question asked of me by one of Melbourne's leading food critics at a dinner. Funnily, he didn't ask why I liked French and Italian food, as if the answer was a given, but in both cases my reply was the same - Mexican food has a way of making me feel connected, connected to an ancient culture whose food has hardly varied in some 10,000 years with few exceptions, and connected to produce that gives a sense of the very earth in which it's grown.

Mexican cuisine is very much dominated by just three ingredients, corn, beans and chillies, so nourishing that they have sustained a race of people through the millennia, but when held up to say French cooking, is easily dismissed as cheap peasant food, or just another type of takeaway, but according to Fiona Dunlop, in her new cookbook, Viva, La Revolucion!,

'Mexican cooking is considered to be one of the world's three original cuisines, along with those of China and France.'

But while the cuisines of the two latter countries has continued to develop, Mexican cookery, apart from major changes wrought after the 1519 Spanish invasion, appears stagnant by comparison; it seems there is only so much that can be done with corn, beans and chillies. Or perhaps poverty has played a part. People more concerned with survival, tend less to play around with their food. Maybe the gutsy nature of the flavours inhibited experimentation, making nuance an alien concept.

But in the last twenty years, there seems to be a movement to modernize Mexican cookery, so while tacos and burritos will always be loved (Mexicans consume 300 million corn tortillas daily, not counting the wheat ones eaten in the north), it is possible to eat Mexican food that is both light and refreshing.

Ceviche is considered a Peruvian dish, whereby seafood is cooked only by the acidity of lemon or lime juice and is a technique fully embraced by chefs in Mexico, who have made it their own. A beautiful, light dish for a hot summer's day. 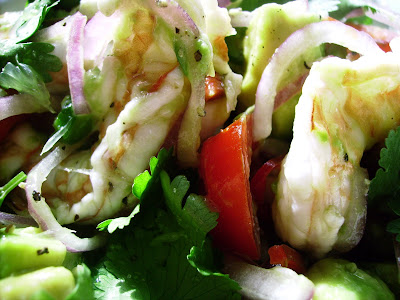 red, white and green, colours of the Mexican flag

Place the prawns, red onion and chillies in a non-reactive bowl and cover with the lemon juice, leave to marinate 15 or 20 minutes. When the prawns are fully cooked through by the lemon juice, drain and mix in the avocado and tomato and season with the salt and fresh ground pepper. Place decoratively on serving plates, give each plate a good squeeze of lime juice and garnish with coriander leaves.

*The original recipe called for 12 jalapeno chillies. Use any chillies with which you are familiar, or, leave them out altogether and add capsicum strips instead.

i love ceviche, i ate it all the time when i visited peru (i dont seem to care about food poisoning do I?). to be honest i have never tried making it though. if i find some super fresh prawns in my travels i might jut have to try this

One night in Cancun, Gorn & I couldn't decide where to eat dinner. Finally what we did was go into 7 different places and ordered one Tecate beer (that was one we liked at the time) and a bowl of Ceviche. The 7 beers were all the same. The seven Ceviches were all different and each wonderful!
Wish I had a bowl of yours now!

Wow, this sounds just wonderful. I've only had ceviche once, made by a family from Bolivia, but I loved it.

You're getting pretty good with that camera too!

Delicious. But 10,000 years says you have to leave the chillies in.

Hi ran, maybe all that lemon/lime juice killed all the nasty germs. As you know though, it doesn't have to be prawns, fish would be equally as good.

Hi tanna, sounds almost like tapas the way you describe it. Sounds like a magical time, seven beers would have meant a happy time!

Hi kalyn, it's a great dish, so fresh and light. Speaking of light, that's the secret of my improvement...as the light gets better, so do my pictures!

Hi kitchen hand, you're right, but at least a capsicum is in the family. I do know some poor souls who can't eat anything with chillies, sad, isn't it?

that recipe's great! I have a similar one i found on the LURPAK butter website as an entree and maybe not as intense as this mexican conconction. here it is below:

Using the point of a knife, carefully remove and discard the black vein running down the prawn's back.

Melt the butter in a cold frying pan and heat until golden brown. Add all ingredients and fry over a high heat while stirring for approx. 5 min. Arrange on heated individual plates and serve at once.

Tip: The course can also be served for lunch and will then be sufficient for 4 persons, followed by a cheese platter.

Stacy, you are a very naughty sock puppet.

Hi tanna, I'm with you, personally, I'd never take them out, they suit the dish. I just wanted to give an option for those who don't like chile.

Mexican food is my favorite. I used to live in Taos, New Mexico, which is steeped in Spanish and Indian heritage. And wonderful food! And great wine! And beautiful art!

Yes, keep the chiles. And thanks for the recipe, it looks like a good one. I've never been to your blog before -- I love it.
Melissa

My eyes were opened after talking to Chris Manfield. She went there in 2005 and came back to spread the news that it wasn't all Tex-Mex. Should chocolate be on your list of Mexican ingreds?

I was told that the green jalapenos are not suppoed to be that hot if you take the seeds and membranes out. The dried red ones are hot. So probably wouldn't be too spicy.

Look mighty delicious, I would try with 10 jalapenos. It might not too spicy as long as you deseeded. No?

Hi melissa, you are so lucky to be close by. Over here there is only one, maybe two decent Mexican restaurants, but their menus are fairly limited. You are so right, their's is a wonderful culture.

Hi thermomixer, it seems everyone who goes there is touched by the magic of the place. Mexican chocolate is a million miles away from what we know as chocolate, a fantastic product in its own right.

I looked for jalapenos, but it's probably a bit early in the season. They can be a lottery depending on how they are grown. Some seem quite mild, while others blow your socks off, it's the cooks duty to taste...!!!

Hi elra, I would love to try it with you, nothing like the presence of danger to make food taste better!

There is nothing quite like Mexican food, and I find it just tastes better in situ. Yes, there is a great Mexican place here in London that serves tacos al pastor, but it is just a different beast to the tacos al pastor I had in Chihuahua.

I LOVE ceviche - this one looks quite spectacular.

Ceviche its a delicious food , There is two kind of ceviche the mexican one and the peruviand both are delicious.