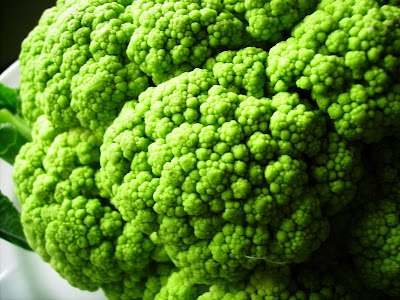 NEWS FLASH -- A little leprechaun has been seen in the vicinity of market gardens with a tin of green paint.

No, not really, but it sprung to mind when I saw this at my greengrocers the other day. It's a broccoflower and I was told that it tasted a bit more like broccoli than cauliflower and also has a very short season. He also lamented that he would most likely have to throw them out as there are too few people who like to try something so obviously different; bless him for putting unusual things on his shelves though.

For me, it was a case of in the basket first, ask questions later.

As you can see, it is a vivid green, but I wouldn't say it was that much like broccoli, though it would be fair to say it's milder and a little sweeter than regular cauliflower, which makes it ideal for kids...if they're happy to taste it. Ours was and took a big scoop of the mornay it was turned into.

If you see one, grab it, they're not just a pretty colour.

Love me an unloved veggie, I do. Just not chokoes. 'Cos they really are unlovable.

I agree with Lucy. I like making cauli & broccoflower mixed salad. Visually appealing -to me anyway.
It holds its shape better than broccoli when cooked.

It should really be St Patty day for this broccoflower and your leprechaun! So I will be looking for one of these!
I like that: not just a pretty face.

Look at that colour! I saw pic of different-coloured cauliflowers at a farmers market (in Canada??) the other day - white, green yellow and purple!

Hi lucy, isn't it just, there was absolutely no resisting its charm. A beauty indeed.

Hi thermomixer, like the sound of the salad, any special dressing? Bet it looks great.

Hi tanna, I was so wishing it was St Pat's day, this would have been perfect along with some green beer!

Hi jeanne, it was the colour that dragged me to it. Other colours you say, looks like the mad scientists are at it again!

I have a well-known aversion to cauliflower, so the first time I saw this in the market, I thought oh goodie, here's a way to get some "cauliflower" into my diet. Cooked it up, loved the color, took my first bite -- and said no! Too much cauliflower taste for me. But it makes a beautiful centerpiece on the dinner table!

Hi lydia, love your non-culinary use for it! It is a milder version of the vegetable, but definitely nothing like broccoli as I was told.