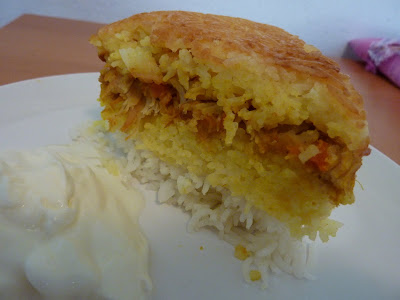 I'm having an affair.

Didn't see it coming either.

A beautiful exotic stranger flirted with me and I've fallen, hard. Charms that were impossible to resist, of thoughtfully spiced dishes, layered with complexity and full of allure, ensured my heart beat has been tied to a new found rhythm of Persian sensuality.

Iranian food is not heavily spiced, rejecting the ferociousness of their Indian relatives' approach; one bite and gentle flavours intriguingly play out across the tongue, always inviting another mouthful.

Saffron is a spice that some don't quite get. Melbourne food critic, Stephen Downes, has called it a brute of a spice, others have compared it to the taste of rusty nails, like an old dowager smothered in Chanel #5, vainly attempting to recapture the youthful attention of her salad days, whose over indulgence only assaults the nostrils.

But when combined by a sensitive hand with turmeric, it becomes redolent of ancient bazaars supplied by merchants plying the silk route with their camels, speaking the history of a nation. 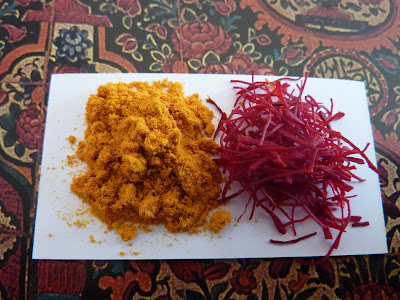 These two spices are perhaps the heart and soul of Iranian food and in combination with another staple, rice, form the very foundation of the native cuisine. It is what first drew me to its bosom, rice cooked using the chelo method, firstly briefly boiled until al dente, then mounded in a frypan and cooked until a tahdig (crust) forms. The idea of cooking the rice layered with other ingredients, polo style, saw me swoon completely. 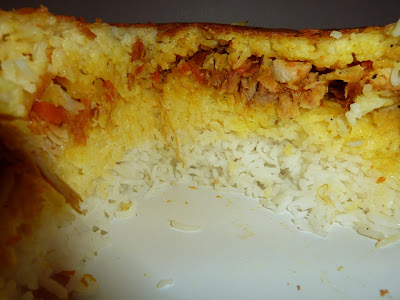 Kind of like a geological formation, isn't it? Note the white rice at the bottom, then layers of rice coated with egg, yoghurt and saffron, divided by a gently spiced chicken layer.

Wash the rice until the water runs clear, then leave to soak in a bowl of water with 2 tablespoons salt.

Brown the chicken thigh pieces in a little oil until brown, remove. Peel the onion and carrot, chop finely, then brown in the same pot. Return the chicken and add the turmeric, 1 good pinch of saffron, the bay leaves, salt and fresh ground pepper. Just cover with water, bring to the boil, then simmer for about 1 hour with the lid ajar, until the chicken just falls apart and the water has reduced to a thick sauce. When cool, break the chicken into bite sized pieces.

Grind the remaining saffron into a powder in a mortar and pestle and dissolve in about 40ml boiling water.

Whisk the eggs and yoghurt in a bowl until combined, then stir in the saffron water.

Traditionally, the lid of the pan is covered with a cloth on the inside to absorb the steam, but not having a lid to my pan, just covered it loosely with tin foil. Cook on the lowest heat possible until a nicely browned crust has formed, about 45 minutes.

Leave to rest for 5 minutes, then turn out onto a plate, cut into wedges and serve with plain yoghurt.

Beautiful! I'm so intrigued by Persian food. The colors, aromas, and the stories behind the dishes are just so seductive. Happy New Year to you and your family, Neil!

Hi lydia, I couldn't believe that it's taken me so long to discover Persian food. Plenty more things to try out, that's what I love about food, there's always something new.

Hi azita, thank you! And a very happy new year to you too. Can't wait to get stuck into more Persian recipes.

I tried that other one you posted a few weeks ago, but without the cherries. It was fantastic.