Artichokes with Asparagus and Broad Beans 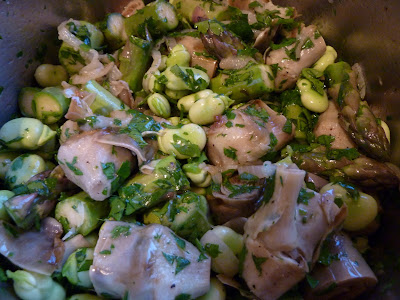 When you have a surfeit of produce, like a box of artichokes, you need a variety of ways to deal with them. The previous post featured preserved artichokes, which is an excellent method of using up a large quantity of small ones, but to make the most of them, recipes keeping things fresh and vibrant really herald in the spring season.

What better than to feature a trio of vegetables at their peak right now and only available for a short spectacular time, asparagus, broad beans and artichokes, done in a very Italian manner.

Italians have an effortless way with vegetables and deftly manage to produce dishes entirely from them that unless you really think about it, in no way seem to be vegetarian. With a slice or two of bread, they fully satisfy a hungry stomach, leaving no craving for a bit of flesh.

At this stage of spring, broad beans are by the bucketful and still slightly immature, not needing to be double podded; thick meaty asparagus spears, the size of which would bring a smile to a Trojan warrior, are all about. Full and hearty, tightly wound globes of artichokes are in abundance, ready to be picked apart leaf by leaf.

Peel all the tough outer leaves of the artichoke until you reach the tender centre, cut off the top leaves and trim the bases, if large, cut each one into quarters. Drop them into a bowl of water containing the juice of two or three lemons as you go. When done, gently heat the olive oil in a pot and put in the onion slices and wet artichokes. Give a good stir, turn the heat to low and place on the lid. Leave to cook about 20-25 minutes, occasionally stirring until the artichokes are tender. Then add the broad beans and asparagus sections, white wine vinegar and season to taste. Put the lid back on and cook for another 5 to 10 minutes until all the vegetables are tender, stir in the parsley and serve with some crusty sour dough bread.

Koukia me Aginares is a favourite Corinthian staple of mine Neil.I love it so much at this time of year & eat it in everything from salads to Pita. The addition of asparagus is a logical one .
Kali Orexi!

Well bugger me, I borrowed this from an Italian (heavily adapted) who looks he like pinched it from the Greeks and added peas! You can see why, it tastes so bloody good. Thanks for pointing that out. Do you think the asparagus makes it Aussie?

Only if its canned!

George Biron used to do a cooking class at Woodend with that name - they really do herald spring. Had lunch at Sunnybrae last weekend and the holy trio featured.

Piles of artichokes remind me of a picture of Guy Grossi's father Pietro standing peeling a HUGE pile of artichokes.

Hi Karine, thanks for stopping by!

Hi 3 hungry tummies, it is too. I cooked a big pot of it in order to have leftovers. When I came to get them, to my sorrow I discovered my wife had already scoffed the lot! Btw, love your name.

Hi thermomixer, going to Georges for Saturday lunch on the Cup weekend, really hanging for it. Do you recommend anything on the current menu?

Know exactly what you mean when you say piles of artichokes!