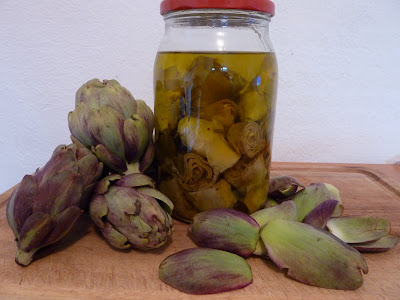 One vegetable's arrival we eagerly look forward to each spring, is that of the artichoke. This fantastically shaped treat is the flower bud of a thistle plant, which would otherwise, if not picked, burst into a fabulous pink/purple bloom.

There are quite a few varieties, ranging from green through to purple and violet, some with thorns, some without. What all have in common, are tightly packed hard fibrous leaves protecting the tender edible core; incidentally, this arrangement lead to the Sicilian mafia becoming known as cosca or artichoke for the way in which they organised their crime families.

On a single plant, there are many variations in size of the chokes. Typically, Italians have the most poetic way of describing them. The head of the plant gives the largest bud and is known as 'la mamma', further down the plant come 'figli', the children and below them the smallest buds are called 'nipoti', or nephews.

In Australia, one doesn't often see the smaller artichokes, though sometimes Italian greengrocers carry them, so it was something of a pleasant surprise to find a stall at a Farmer's market selling whole boxes of them for the princely sum of $10, a mixture of 'figli' and 'nipoti'.

'Nipoti' are the perfect size for preserving in jars for blissful summer antipasti dishes and is really not hard to do, though it must be said there is a little bit of work to peel down to the tender heart and properly trim them; they may be smaller than 'la mammas', but their dwarf size doesn't mean any more tender, they have to be treated exactly the same as any other artichoke - peel ruthlessly!

Put all of the ingredients except the olive oil in a large pot. Pull off as many leaves off as necessary to reach the tender heart of each artichoke, cut off the top and trim the bases, dropping each one into the pot as you go, this helps to stop the artichokes going brown. Bring the pot to the boil, then lower to a simmer and cook for 20-25 minutes or until tender.

Drain the artichokes in a strainer or colander and leave to completely drain and cool, about two hours. At this point, you can no longer touch the artichokes with your bare hands as you might contaminate them with bacteria, use clean rubber gloves.

Have ready enough sterilised jars to comfortably hold all the artichokes and place in them a few of the boiled bay leaves and rosemary sprigs, discard the cloves. Pour some olive oil into a clean bowl and using your rubber gloves, take each artichoke and dip it into the oil and gently squeeze to force any air out, letting the oil penetrate to its centre, then drop each one into a jar, don't overfill as all of the artichokes must be under the oil. When done, fill each jar with olive oil to cover, seal with the lids and gently shake to remove any more air. Store the jars in a dark cupboard for two months before using. Once a jar is opened, refrigerate any unused ones.

I was looking for some artichokes yesterday at the market but they looked so dull! I like preserved artichokes and would love to make mine... Once I settle down that is!

Sometimes they can look that way, but while the greengrocer isn't looking, peel back a few leaves. If the inside still looks tight and fresh, they should be okay.

Hi Neil, they grow wild in the Adelaide Hills. We used to spend hours cleaning them as they are smaller & more spiky than the usual globe type. Not sure if they grow wild anywhere esle though?

I have never preserverd artchokes before and have just been given a banana box full of them from a grower.
Can I only preserve the small ones? I haven't looked through the box to sort out sizes but I don't know much about artichokes at all except that I like eating them so any suggestions as to which I can use and why would be great.