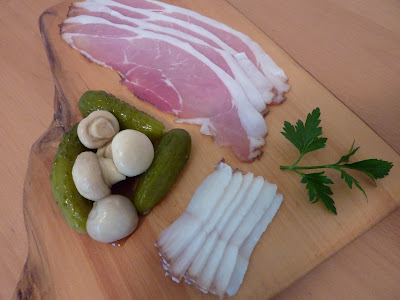 Can you pick the speck?

Look again, there are two lots of speck on the platter. If you picked the pickled mushrooms or fermented cucumbers, hang your head in shame!

Any self respecting German would point excitedly at the pure white fat slices at the bottom and exclaim, "That is the real stuff", while an Austrian would remonstrate with him that the only true speck was at the top.

Both would be right...and wrong - for each are indigenous to their respective countries and have the right to be called speck.

The German version is pure pork fat, called lardo in Italy; it's salted and cured, sometimes cold smoked, whilst the Austrian speck is more easily explained as a deboned prosciutto that has been slowly cold smoked.

German speck can be eaten thinly sliced, just as it is, though your cardiologist might be a tad nervous. It has the same silken unctuousness of good smoked salmon, but also finds its way into many of the local dishes as the fat of choice.

It would be easy to mistake Austrian speck as good quality prosciutto, but the gentle smoking makes it presence subtly felt and the meat seems to retain a bit more moisture. Whilst it is superb eaten as is with some crusty bread, it also brings a special flavour to cooked dishes.

I really recommend trying the Austrian speck if you can get your hands on some, it's sometimes known as raw smoked ham. In Melbourne, it's available from Malvern Continental Butcher & Delicatessen, 79 Glenferrie Road, Malvern, or you could try your local Continental delicatessen.

I could have placed some of that, instead of the common bacon I used, in the cheesy pasta dish I just cooked for a German/Austrian flavour; but you would probably say it would have been wasted.

That reminds me of some people who buy the best wines, put them in their cellar and never drink them because they are too special.

I've cooked with the Austrian speck, a very simple and tasty dish of borlotti beans, speck and wine. It was this dish that caused me to discover there were different specks. By all means, pop some in your cheesy pasta.

I've never used German speck in cooking only because we always have some lard to hand, but it does taste very good.

Thanks for the lesson. Does the german speck have similar spices to the Lardo di Colonatta or just salt?

Being an Austrian myself I would not agree with your description.
We Austrians do call "speck" what you describe as lardo. the above would be called "Geselchtes" which basically means smoked ham but by no means "Speck" I am sorry!
At least the part I come from and live in here in Austria does so! (and I do not even live close to the German borders...

Both do taste great tho! :)
Best regards!

Hi thermomixer, as far as I know there is nothing like that where I shop, sounds awesome, can you get it here? The only spiced speck I've seen is paprika speck at Gruners Butcher in St Kilda.

May I suggest a trip to Uncles Smallgoods, 313 Centre Road, East Bentleigh, they have several great Polish hams.

Hi Astrid, thanks for the info, the whole area is a real minefield, check out the discussion page on speck at Wikipedia to see what I mean.

As far as I can tell, geseltchtes is a smoked and cooked pork loin, whereas speck or as it is otherwise known, Tyroler speck (in Austria, but just speck in Italy), is a raw smoked leg of pork, small but important differences.

Life would be so easy if all these different pork products had their own single name, wouldn't it.

Many years ago I spent a winter in Innsbruck, in the heart of the Tyrrol. There I often chewed through lumps of speck which looked exactly like your pic of German speck!

The best Australian lardo that I have seen has seen comes from Sydney. Chui Lee Luk from Claudes had some and there are butchers in Sydney sucha s Quattro Stelle and Vics Meats (Victor Churchill) who have it.

A pic that I found is at http://www.notquitenigella.com/wp-content/uploads/2009/09/a-victorchurchill22.jpg

I eat the German type by the kilo every week with a good beer and a nice bread. Nothing better.

Cleaning Company in Yanbu
شركة تنظيف بينبع
Cleaning from the basics to maintain health and neglect in cleaning and laziness in its performance is a serious problem and the traditional methods of cleaning may exacerbate the problem as a result of the use of unknown substances that may adversely affect human health
https://fajr-sate3.com/cleaning-company-yanbu/


Furniture transfer company in Madinah
شركة نقل اثاث بالمدينة المنورة
During the transfer of furniture is always subjected to scratching and scratching and sometimes to crash and all this is the result of our dependence on companies that do not have the efficiency of the transfer of furniture in a manner of security resulting in the loss of the most valuable furniture and this is what the company adjusts the value of furniture and delivery in a safe and sound and this company deals with the best employment Trained and expert to carry and transport all types of furniture in a correct manner and professionalism of the workers have the efficiency in the transfer of each piece in a special way to ensure safety and put in cars transport furniture is characterized by cleanliness and is well-ventilated driver is trained to avoid all kinds of obstacles to ensure the arrival of The company offers special prices to satisfy its customers
https://fajr-sate3.com/furniture-moving-medina/


Cleaning company in Medina
شركة تنظيف بالمدينة المنورة
Cleaning skill is one of the most important cleaning operations. Keeping your health and safety from infection starts from being in a clean, disease-free environment. The company understands the importance of cleanliness so its team sends the trainer and the expert to do all kinds of cleaning as soon as possible.
https://fajr-sate3.com/cleaning-company-medina

Furniture Transport Company in Yanbu
شركة نقل اثاث بينبع
"
It requires the transfer of furniture to a craftsman and a special way of dealing so as not to be subjected to scratching or scratching or even cracking so be careful to choose the companies moving furniture and choose their workers carefully and this is what the company is keen to have the strongest group of workers trained to transfer all kinds of furniture in a literal and keen to understand Furniture and carrying each piece in a certain way and put in cars in a correct manner and leisurely and cars are dedicated to the transfer of furniture is clean and dry from the inside and well-ventilated even the driver is trained to avoid obstacles and the way the company offers special prices to suit all categories to reach all classes
https://fajr-sate3.com/furniture-movers-yanbu/